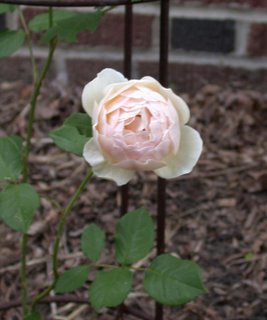 This is my rose, Jude the Obscure. I got it last year from Heirloom Roses , which is a mail-order rose grower that only sells own-root roses (no grafts, so no bud-unions or suckering to worry about), and doesn't spray their roses, but favors what we generally call organic methods, so you know the roses aren't used to being sprayed and coddled and thus should be more resistant than most to pests and diseases. They also certify their roses virus-free, and although I don't know anything about rose viruses, that sounds like a good thing to me. I not only prefer to garden with such plants, but I prefer to support businesses that operate that way.

Jude the Obscure was named for the 19th century novel by Thomas Hardy. I haven't read it, so I can't tell you anything about it. It was developed in 1995 by David Austin, the noted English rose breeder. As you can see, it offered up a luscious blossom earlier this summer, less than one year after I planted it. It's supposed to bloom throughout the summer, but it only had two blossoms in June. I assume that's because it's so new. I chose it not only for it's ball of abundant petals, but also because it is rated "very disease resistant" and has a lovely fragrance described as "lemon/myrrh/peach." Describing rose fragrance seems to be a little bit like describing what wine tastes like. I don't recall this blossom being very strongly fragrant, but I do believe it had a pleasant scent nonetheless.

It's only rated hardy to zone 5 and we are in zone 4, though some people feel that the city itself may have a zone 5 microclimate. I covered it with pine boughs last winter, which was probably not enough to protect it in a normal winter, but it was a mild one, so, obviously, it came through just fine.

Posted by Sharon Parker at 6:57 PM