No Lavender for You, Young Man 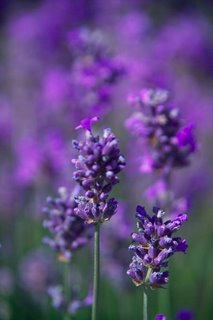 Last year when I was visiting with a soap maker at the Midtown farmers market, she told me that the lavender-infused soaps tended to be soporific, and that she had, in fact, been known to fall asleep while making it. At the time I thought a lavender sachet under my pillow might be a good sleep aid, although I haven't tried it. Now I have an added reason to give it a try, although I come to this theory in a somewhat convoluted way.

An article in the July 1 issue of Science News suggests that products containing lavender essential oil may not be a good idea for children, especially boys, because both lavender oil and tea tree oil contain compounds that they say "mimic female sex hormones and interfere with male hormones."

There's a condition known as gynecomastia, wherein males develop enlarged breasts, that happens when guys experience an imbalance between the activity of estrogens and androgens. It's extremely rare before puberty, researches say, but pediatrician Clifford Bloch of Denver, Colorado, says he has seen a number of cases of this in boys age 10 or younger since the mid-1990s. Most of these kids had normal hormone levels in their blood, which meant it wasn't their glands that were at fault.

So this doctor did a little detective work and found out that at least five of the boys had been using a shampoo, hair gel, soap or other product that contained lavender oil. "A couple of patients were putting pure lavender oil on their skin," he told Science News.

He told the kids to stop using lavender products and their chests returned to normal boy chests within a few months. Later laboratory tests confirmed his hunch that the lavender oil does indeed stimulate estrogen-regulated genes and inhibit androgen-regulated genes. They also found this to be true of tea tree oil.

The article suggests that the early onset of puberty in some young girls may also be related to use of products containing these plant oils, but more research would need to be done to say for sure.

They don't seem to think there's an issue here for adults and maybe not even for older teens. But since kids prior to puberty have low amounts of sex hormones to begin with, it wouldn't take a lot to skew the balance. Still, I can't help but wonder if there's something here that could be helpful to women of a certain age in alleviating menopausal annoyances.

It made me think--hmmm, since summer, I haven't really noticed much in the way of hot flashes, and I've been using a sunscreen that contains lavender. Coincidence? Maybe, but now I'm intrigued and will have to see if anyone's done any research on the effects of these botanical oils on menopause symptoms. I'll let you know if I find anything out worth sharing.

(The lovely photo of lavender that appears above is from FreeFoto.com.)
Posted by Sharon Parker at 1:22 PM