A rose for grandma 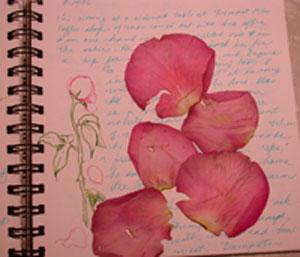 I'm sitting at a sidewalk table at Fireroast Mountain Coffee shop when a man comes out with his coffee in one hand and a wilted rose in the other. He decides to go back in for a top for his coffee cup and begins to set his rose on my table. I invite him to put it in my water glass, which he does. It's a very pale pink, almost white rose, with a hint of color around the edges. It's still in bud form, as though it never opened. When he comes out, I say that it needs a fresh cut on the stem. "Yes," he says, "When I get it home I'll cut the stem under warm water."

"From a Dumpster," he says, gesturing with his head toward the west as he's lighting his cigarette. "Dumpster diving," he says, without embarassment. "I'm going to give it to my friend and tell him that Jesus loves him."

"There were more," he continues, "but this one is enough. There's a flower shop at 38th and Minnehaha. You can look there for flowers."

"Dumpster diving," he says again, as if he were telling me about a special sale I might not want to miss out on.

"There was a young man looking for flowers for his great-grandma," he says. "I told him how my great-grandma blessed me on her deathbed. He didn't want to hear that. She told me I could ask Jesus for anything. 'In that case,' I said, 'I'll ask him to let you live.' 'Oh, don't do that,' she said."

He was fighting tears as he finished, then he turned and walked away without saying anything more.

When I left the coffee shop, I thought I would check the Dumpster to get some flower petals to press and use in some art project. So I biked over there and was peering in the Dumpster, pulling out three gerbera daisies that still looked pretty good to me, when a woman pulled into the alley in her car, paused briefly and said, smiling, "Some good bargains in there!"

I also found some rose petals, which I placed in my journal to press them.
Posted by Sharon Parker at 11:51 PM