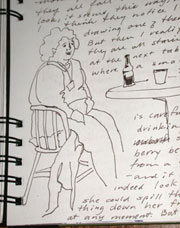 Sometimes when I'm sitting at a coffee shop (and I do that a lot), I decide to practice my rendering skills by discreetly drawing some of the people around me in my journal, often jotting down snippets of their conversation in the process. Since they aren't always staying still, it pushes me to be quick and concise (though I usually choose someone who isn't too animated). And eavesdropping at the same time just makes it all the more interesting to me.

Just yesterday I was doing this at Nokomis Beach, my local coffee shop, while three people were talking at a table across the room from me. The woman I was drawing was saying something like, "She doesn't like to work. She comes to work and just monkeys around." Since this could easily apply to my work ethic, when I noticed that they all fell silent I thought for a moment they were looking in my direction. I also thought they had noticed that I was drawing one of them and wondered if they would be amused, offended, or what.

But then I realized that they were not looking at me, their collective gaze was directed at the next table, where a small girl is carefully drinking a thick strawberry smoothie from a rather large cup -- and it looks as though she could spill the whole contents down her front in one big "glop!" at any moment. But she doesn't, and soon the conversation resumes.
Posted by Sharon Parker at 8:08 PM