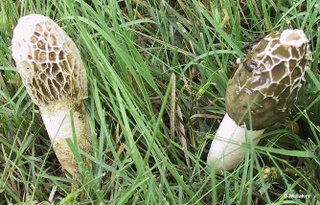 A few springs ago I had noticed what appeared to be a morel mushroom in my city yard, next to the decaying stump of an old elm tree. After checking with some folks at the Minnesota Mycological Society, I was certain that it was, indeed, a morel. They even like to grow near dead elm trees, I learned.

So when I saw what sure looked like several morel mushrooms this fall, popping up in the boulevard of my new neighborhood (we just moved to a different part of Minneapolis), in an area that could certainly have held the remains of the ground-up stump of an old elm tree, I was astounded to see so many of these popular delicacies right out there in the open, and in the fall, no less. The caps were mostly covered in a thin coat of mud, but since we had had a fair amount of rain recently, this didn't strike me as anything unusual. I did wonder, though, do morels grow in the fall?

I sure didn't think so, but I had studied pictures of the poisonous false morel, and I knew these weren't that, so what else could they be? I tried a Google search on "fall morels" and "September morels" but didn't get anything helpful. So, one Sunday morning, thinking some morels with our scrambled eggs would surely be a treat, I went ahead and picked a few.

That's when I noticed that they had a rather unpleasant odor. And when I got them home and was washing the slimy mud off in the kitchen sink, I began to think, even if these stinky mushrooms are morels, I don't think I want to eat them. So I threw them in the compost instead.

Later, I tried another search, this time using the term "autumn morels" instead of "fall," and don't you know the first sites that popped up were about how novice mushroom hunters often inquire about "autumn morels" but what they're really seeing are stinkhorns. Morels only appear in the spring.

I forgot to mention that the other thing that kind of bothered me about these mushrooms was their decided resemblance to, well, er, a certain part of the male anatomy. I didn't recall ever making that association with mushrooms before, and certainly not with morels.

So it didn't come as any surprise that this particular class of mushrooms are described in a mushroom guide (I got one from the library after all this) as "phallus-shaped"; and, indeed, the Latin name of this genus of fungi is Phallus. Even better, the particular stinky mushroom that I had picked was Phallus impudicus or "shameless stinkhorn." Indeed!

An even more obviously phallic relative of this fungus would be the dog stinkhorn, or Mutinus caninus, which you can see here.

The photo of a Phallus impudicus, and more information about these, shall we say, curiousities of the mushroom family, comes from MushroomExpert.com.
Posted by Sharon Parker at 12:57 PM