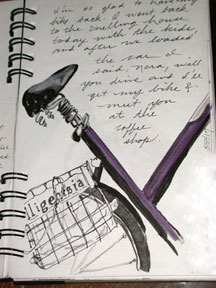 We moved our household in stages this fall, and so it wasn't until after we'd been in the new place for a week that I got my bike. I had my daughter drop me off at the old house and I rode my bike home (only about a mile and a half). I missed having my bike so much and was so glad to get it back; that's when I did this drawing in my journal. (The letters on the basket are from a "Local Intelligentsia" bumper sticker, which is a play on the slogan of the Minneapolis Observer: Local Intelligence.)

It's not that I'm this avid bicyclist with the spandex outfit and funny shoes and all that. Rather, I use my bike as transportation whenever distance and weather and other factors permit. Where we live now, it's about a mile or so to the post office, library, bank, and my current favorite coffee shop -- and all within 1/4-mile of each other. So most of the errands I need to run are within easy biking distance. My knees aren't so great and it would be difficult for me to walk that distance, and I would hate to have to drive to such close destinations.

The other day I noticed a white-haired woman peddling along in Downtown Minneapolis, her black sweater open at the front and flapping dramatically behind her, and I got to wondering how long I could expect to be able to ride my bike. OK, I'm only 50, so I don't worry that the end of bike-riding will be anytime soon. But it just made me think about how much I enjoy getting around by bicycle and how much I hate the thought of not being able to do that some day.

So I did a little Internet research to see what might be possible. I came across a story about 78-year-old Bill Anderson, who in October 2004 completed a bicycle trek from San Diego, Calif., to Jacksonville Beach, Florida, to raise money for a mission that helps the homeless. It only took him about a month.

Another site told of 85-year-old Bill Grun who regularly logs 1,000 miles a summer on his bike.

Now I have no such ambitions, but I figure for each of these guys that does something so spectacular they make it into the news for their bike-riding feats, there must be dozens more who ride their bikes to the post office and such, right? I sure like to think so.
Posted by Sharon Parker at 7:25 PM