Bridges Over the Mississippi 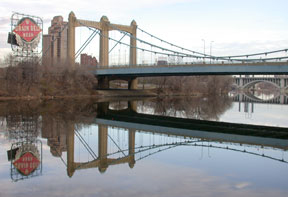 I had an errand to run over on West River Road, which follows along the Mississippi in Downtown Minneapolis. I had my camera with me and, since it was such a beautiful day -- highs near 70 at a time of year when it would normally be in the 30s here in Minnesota -- with sunshine and nary a breeze, making for great reflections of the bridges in the water, I had to take some photos. I also do some freelance work for a community newspaper called The Bridge, which serves neighborhoods on both sides of the river, and they like to feature a small photo of one or more of the bridges over the Mississippi in the upper left corner of the newspaper each month, so I had a handy excuse to take some photos for that as well.

This one has the the vintage and now iconic Grain Belt sign (one of the city's longtime breweries, though it is no longer made here), with the Hennepin Avenue suspension bridge in the foreground, followed by the Central Avenue bridge seen under the Hennepin bridge.
Posted by Sharon Parker at 11:21 PM