12 Days of Christmas--book by Leigh Grant 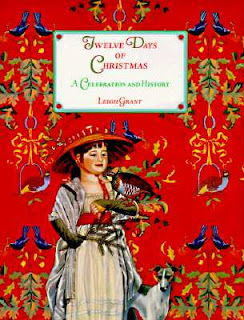 (If you're looking for my six geese a-laying, they're right below this post.)

Here's the book I mentioned in an earlier post, which has been cited by several of the sources I came across on the Internet. It's Twelve Days of Christmas: A celebration and history by Leigh Grant (Harry N. Abrams, Inc., 1995). It's a lushly illustrated picture book with historical and cultural notes, prefaced by a brief introduction that provides historical context for the song itself and for the things referenced in the song, at least according to Grant's interpretation.

Grant sets the song in 18th-century England, at a lavish estate, where preparations are taking place for a 12th-night party. Each verse is accompanied by a full-page or larger color illustration, rich with period detail (the nine drummers drumming are wearing white powdered wigs, tri-corner hats and bright red coats, for example).

To this she adds her own quatrains that further illuminate the text, such as this one for the third day (and I'm glad to say she, too, thought to use a French breed of chicken for her illustration; most sources on the Internet just shrug it off as if any old chicken is the same as another): "Some say this song came from a game, / Some say it springs from France. / The Breton hens uphold the last / And strut a country dance."

But the best part of this book, for history buffs anyway, are the long notes at the back. Not to downplay the illustrations, which really are delightful and detailed and very clever (I had a hard time finding all seven swans because of a little twist in her artistic interpretation that makes one of them almost invisible), but the notes really flesh it out and, I'm pleased to say, give credit to the often overlooked pagan origins of Christmas. She doesn't disparage or discredit the Christian traditions and symbols of Christmas at all, only places them in their proper historic and cultural context, which includes the old Roman holiday and the tradition of electing a "Lord of Misrule," referenced in the notes and also in the quatrain for the 12th day: "Hey! Ho! For the Lord of Misrule! / Play us a tune or give us a fool. / Feasting and dancing wassailing the crown, / The company's merry, the revelry loud."

The book has some differences with other sources I've been consulting. One is that Grant claims that the red partridge can perch in trees; the sources that said partridges don't or can't perch referred to the grey partridge. The one I drew was a red partridge (because it was prettier, not because I knew it was the tree-perching sort). Another difference is that she attributes the five gold rings to ring-necked pheasants. I had encountered this explanation before, so I guess we'll add it to the five-gold-rings variations.

I got the book from the Minneapolis Public Library (which has several in circulation).
Posted by Sharon Parker at 9:54 PM