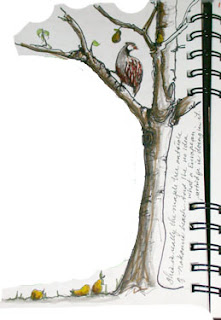 I rather like the 12 days of Christmas because everything is so much calmer after Dec. 25. I also like the imagery in the song, especially all the birds, and so was pleased to read in the Minneapolis Star Tribune last week in the birding column by Jim Williams about how some American ornithologists, Jeff & Amy Price, did a little research on the song and suggested several North American species that would be the equivalent to the ones named in the song.

They also said that the first seven verses are all about birds -- that the "5 golden rings" were really a distortion of a Scottish term for a type of turkey -- "gulderer."

This got me to doing a little bit of Web research of my own (nothing comprehensive, mind you, though I may yet) and, indeed, I found other sources that agreed with the Prices, at least in so much as that the five golden rings are a mistake and that it should really be some kind of bird. One site thought the "rings" referred to ring-necked pheasants or some such.

A few of these sites pointed to a book called The Twelve Days of Christmas: A Celebration and History by Leigh Grant, written in 1995 and, fortunately, available in our public library system, so I have requested it.

My sister-in-law also reminded me that there have at times been rumors going around the Internet that the 12 Days were originally composed by oppressed/repressed Catholics under English Protestant rule as a secret way of remembering certain tenets of their faith. This, as one might suppose, is a myth that started circulating in the 1990s. Maybe it's what motivated Grant to write his book? Anyway, I look forward to reading it and I'll try to post a little bit about it here once I do.

Well I got this idea to do a sketch on each of the 12 days of Christmas based on the song subject for that day as a way to make a practice of drawing something in my journal every day. So this partridge in a pear tree (really a maple tree that was outside the Nokomis Beach coffee shop where I drew it) was my first day's excercise. Although I actually drew it on Dec. 24 (would that be day minus-1?) after taking a break from standing in the kitchen a little too much. It's still mild and nearly snowless here, so I rode my bike to the coffee shop and sipped a mocha while I drew the tree just outside the window, and looked at earlier drawings I had done from pictures of partridges to craft this one (this is supposed to be a red-legged partridge, which is a European bird; most English sites referencing the song mention the grey partridge, also European, but I thought the red-legged one was more interesting to draw).

Except, not only is the "pear" tree incorrect here, but also the partridge. I read on an English ornithology Web site, that partridges are ground-dwelling birds -- "never likely to be found in pear trees!"

The North American counterpart to the partridge (never mind that we do have grey partridges here because they've been introduced -- they're not native to this continent) would be a type of grouse, say the Prices.
Posted by Sharon Parker at 9:10 PM