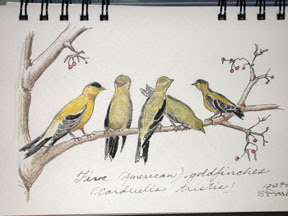 You may think I made this one up too, like the four "cawing" birds, but I didn't. Several sources insist that the first seven verses of the 12 Days of Christmas are about birds, and that this one, as we currently know it (five golden rings), has been distorted from its original meaning, and maybe even its original phrasing. The Prices (sited earlier, and below) and others say the original was five "gulderers," which they say is a Scottish term for a type of turkey. But the UK-based site I came across yesterday, the Gateshead Council, claims that "gold-rings" was an old term for goldfinches (they also offer the "gulderers" interpretation, suggesting that one could take either as correct). And they refer to a painting of the Nativity by Piero della Francesca, which includes a goldfinch, as the reason they may be associated with Christmas. Except the only bird I could find in that painting, sitting on the roof of the stable, doesn't look like a goldfinch to me, not even a European goldfinch.

I thought goldfinches are prettier than turkeys, so why not? I put them on a branch of a crabapple tree, not knowing whether they would be found perching in such a place, and I made only one of them bright yellow, which is the male plumage (in summer), because I didn't think five adult male goldfinches would share a branch -- I assumed they are more territorial than that. But I don't really know. So the others are juvenile or female. I am not too crazy about this drawing, but it's late and I don't want to start another one at this hour, so it will have to do.

Maybe I would have more opportunities to study goldfinches if I kept my feeder full.
Posted by Sharon Parker at 11:32 PM