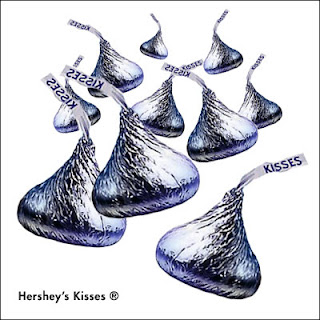 I was sitting at Sovereign Grounds coffee shop, at 48th and Chicago Ave. in South Minneapolis, waiting for the original Amazon bookstore to open because I had some orders to pick up, when I began to pick up on a conversation at a nearby table where a woman was telling a story about buying several bags of (presumably, Hershey's) kisses for some recipe, along with several other items, "and the total came to $36," she said, "and we didn't question it." Now I'm expecting to hear her say that she was overcharged, but instead she continues by explaining how she figured that they were undercharged.

She explains, "We bought 3 sweatshirts and those were $12 each," and then says how the store cashier "scanned the Kisses 6 times but must not have hit the right button." OK, so now I'm expecting the story to continue with how she went back to pay for the unintentionally purloined Kisses, but instead she concludes, "So we got all those Kisses for free." And the friend she was telling this to seemed to share her sense that this was simply a stroke of good luck.

Am I the only one who finds this appalling?
Posted by Sharon Parker at 11:30 AM