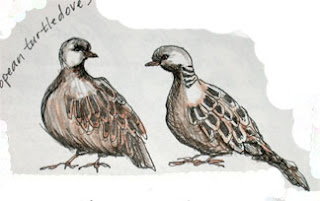 In the article by the Prices that I mentioned in my previous post, they offer North American birders the mourning dove as our native equivalent to the turtledoves in the song "The Twelve Days of Christmas." But I am more interested in finding out and drawing, though not exactly in a precise scientific sort of way, the actual species that the song references. So here are two European turtledoves -- Streptopelia turtur. My version, drawn with Pitt pens, mostly, is a little less colorful than the real thing, which have a bit more of the soft apricot color on them, at least in the images I found on the Internet that I worked from.

The sites that I found expressed some concern that these birds may be threatened, apparently due to habitat loss. This UK site offers more information: The Royal Society for the Protection of Birds
Posted by Sharon Parker at 9:39 PM