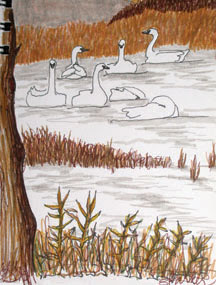 Several years ago I learned through the Minneapolis chapter of the Audubon Society about Rieck's Lake on the Mississippi in Alma, Wisconsin, where the tundra swans stop over on their way from the arctic circle to their winter home on the Chesapeake Bay or in swampy areas of North Carolina and Virginia. For several weeks in October and November, hundreds of swans gather at Rieck's Lake to rest up and eat wild celery and arrowhead tubers; they move on when the water starts to freeze up.

Our family went down to see them that fall. And a couple of years later, in November 2004, I took the kids and went with another homeschooling family for a field trip. It's quite a spectacular site if you manage to get there when the numbers are high, especially if you see the flocks flying overhead on their way from points in North Dakota where they stop before coming to Wisconsin.

Well, I thought with the mild weather and all, maybe there will still be swans on Rieck's Lake this late in the season, and wouldn't it be a lovely Sunday drive with my true love to go down and see them? So I e-mailed the folks in Alma, who keep a Web site called Alma Tundra Swan Watch, to ask if the swans might still be there. A helpful fellow named Gary replied right away and let me know that they had moved on, but that I could see Trumpeter swans in Hudson, Wisc., if I liked -- there's a flock that winters there in a sheltered bay on the Mississippi. He even sent a link to a map showing me just where to find them.

Hudson is about half as long a drive as Alma, so I was quite pleased to learn this, and attempted to persuade my true love that we should go. But, alas, the weather did not cooperate. It has been raining all weekend, and finally the rain turned to slushy snow this afternoon and the driving is quite hazardous. I was glad we did not get caught in it while on our way from Hudson. Nor do I suppose it would have been pleasant to stand outside in it attempting to see swans through the flurries.

So, I found the sketchbook that I had taken with me on the 2004 trip, and got a little visual aid from the Cornell Lab of Ornithology, and managed to come up with this drawing of seven tundra swans a-swimming on Rieck's Lake. You only see the heads of five of them because one has its head tucked under its wing, apparently napping, and another is nibbling on arrowhead tubers. My original drawing, on which this is based, had six swans pretty much as I have re-created them here, I just added one more.

Gary sent me a second e-mail letting me know of another spot in the Twin Cities metro where swans hang out in winter, in Monticello. He explained that they stay near the power plant there because the water remains open, and because a woman feeds them corn.

So if we get a weekend with pleasant weather, we may yet go see swans this winter. But it won't be on the seventh day of Christmas, alas.
Posted by Sharon Parker at 5:57 PM