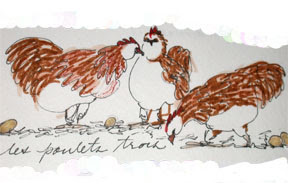 It's a funny thing trying to find images of "French hens" on the Internet when you want to avoid someone else's interpretation of the song. I tried "French chickens" and got a number of politically oriented sites that used the term perjoratively. I didn't go there.

So I tried "French chicken breeds" and that did it. In fact, there's quite a comprehensive Web site on different breeds of chickens, and a number of sites and groups devoted to the preservation of heirloom, or what they call "heritage" breeds of chickens. If you're interested in that sort of thing, pay a visit to Henderson's Chicken Breed Chart. It's quite comprehensive!

These are loosely modeled after Faverolles, which are named for the town in France where the breed was developed.

I was sitting at a coffee shop drawing these French hens (this time at a chain that I won't name) and I rather got a kick out of the fact that there were two men sitting behind me speaking French! It sounded like one was either a native speaker or just very fluent, and possibly a teacher, and the other was practicing with him. A woman who was working there joined in at times, going back and forth between French and English.
Posted by Sharon Parker at 9:46 PM