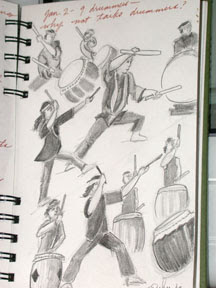 Here we are at the 12th day at last, and here are the drummers who not only first paid me a call on the ninth day, when I drew nine drummers and then later realized it was supposed to be nine ladies dancing, but who also may account for the 10 lords leaping right off the page, coming as they do with their booming taiko drums right behind the 11 bagpipers.

Even though I only have nine drummers here, you can see 12 drummers drumming in the Minneapolis/St. Paul area if you go to a Mu Daiko performance--they really do have 12 drummers! (So why aren't they giving a public performance on the 12th day of Christmas? Someone really should talk to them about that! In fact, their next scheduled performance isn't until June.)

I am going to back off on the daily posts here now and turn my attention to my business Web site for a while; that's the Minneapolis Observer, or, as we have now redubbed it to match our print publication: MOQ (add "quarterly" to the previous), pronounced em-oh-queue, in which we explore the bucolic city, which may include taiko drummers, even though their thunderous sounds may not strike a person as particularly "bucolic." But if it's about nature, art, or wordsmithing in an unplugged and locally urban sort of way, then it is likely to catch our fancy at some point and show up in the quarterly.

If I may continue this unabashed promotion for just a while longer, since MOQ is mostly a print publication (isn't that quaint? -- aren't you glad I didn't say "bucolic" again?), if you would like to get a free sample issue, please send a request to me, sharon@mplsobserver.com, and tell me that you know about this offer from my blog, and I'll put one in the mail to you (so, obviously, you must provide your snail mail address--not to worry, I can't afford to do mass marketing by mail, so you won't be added to any mailing list; nor to any e-mail list). Single issues are otherwise $4 each, and a one-year subscription is $15.

Oh, and MOQ was nominated for Best New Publication in the 2006 Utne Independent Press Awards. We didn't win, that honor went to an excellent publication that also has a local focus, New England Watershed, but we still feel very honored to be among the eight nominees.

We had noticed that the winner and one other nominee (Conveyer, which is based in Jersey City), plus MOQ, have a decidedly local focus. As the editors at Utne put it, "Place is an important part of how we construct our identities, which is why it's no surprise that three of our nominees in this category seek to explore it. " We hope this is a sign of an emerging trend--you know: local is the new global. Not that we favor parochialism, only that we advocate a thorough grounding in and exploration of one's own surroundings.

Look for something new both here and at the Minneapolis Observer about once per week. If you like. I don't mean to sound bossy. Have a nice day and thank you for visiting my blog.
sharon
Posted by Sharon Parker at 10:13 AM