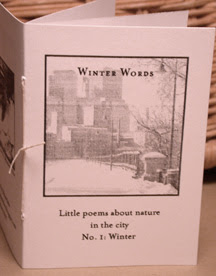 I'm participating in a swap on Swap-bot of ATC-sized "minizines" (although I would call them pamphlets). I had been pondering what topic my "zine" should address, and most of my ideas were potentially a bit too involved, when I saw that someone else in the swap made a zine of "Squirrel Haiku," which I assumed were her own verse. So I thought, hey, I write a lot of short poems that could fit in a little pamphlet like this. Since my poems are generally nature-oriented and, naturally, seasonal, I thought I'd pick a few for the current season, pair them with some of my photos, and, well, here it is. The requirement was only to make 8 pages, including covers, so I decided not to tax myself by attempting to do more than that (plus, I could only come up with five poems that were winter-themed and, even in this limited distribution format, publishable).

But now that I have done this one, I plan to do three more for the other seasons.
Posted by Sharon Parker at 8:39 PM