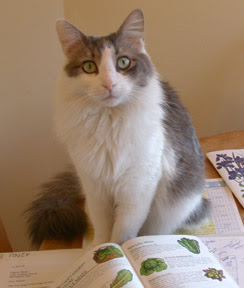 This is my cat Tres, so named because we already had two cats (still have them) when we got him, so he is cat number 3, or "tres" ("trace"). Here he is helping me with garden planning. He "helps" by pushing things off the table that he thinks I don't need, like pencils, for example.

Well, yesterday, Tres was not his usual pesky self. He slept all day (even more than usual for a cat!) and when Martin tried to pick him up Tres growled continuously; when Martin tried to sit and just offer him a lap, which he usually enjoys, Tres just continued to growl and grumble. Either he was hurting or he was very crabby.

So we figured Tres didn't feel well and decided to just leave him alone for a while. I felt his nose and it was cool and damp, so it didn't seem too worrysome. Then Nora checked him out (she once volunteered at a vet's office because she was going to be a vet). She said he must have an ear infection or something, one of his ears was quite hot, the other one was not.

That brought back memories of when my kids were little and we had to deal with earaches and the like, but instead of pumping them full of antibiotics and mess up their immune systems, I would study their symptoms and look it up on a chart in a book about homeopathy, give them the appropriate remedy, and they'd soon be on their merry way.

The "one hot ear, one cool ear" reminded me of the symptoms that would point to homeopathic chamomile -- only it would be one cheek red and hot, the other normal and cool. And the accompanying emotional symptom? Whiny crabbiness.

So I told Nora to give him chamomile tablets (little pellets), which she did, and later that evening he was pestering the other cats and making them mad. Aah, normalcy.
Posted by Sharon Parker at 6:35 PM