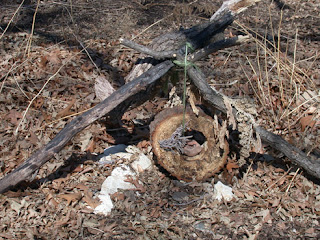 Spring is emerging here in the frozen north of Minnesota, and so on Friday I went for a little walk to enjoy the warming sunshine. We have some great natural areas along the Mississippi River in Minneapolis, and this particular spot at E. 36th St. and the West River Road has a little parking lot and then a vast expanse of trails, woods, and little pockets of prairie. It's a favorite area for birders as well as nature lovers of all sorts.

I was walking around looking for things to photograph for a Swap-bot "extreme close-ups" photo ATC. I thought I might find some tree bark with interesting patterns, or a patch of moss or something (there's not much green around here just yet). As I was walking, a man came from the parking lot and was heading down one of the hilly slopes when a voice from atop the hill in front of me called out "Catch me if you can!" The man, in his 50s, I'd guess, and sporting a long scraggly beard and hair like an aging hippy, quickened his pace and hurried on up the hill in front of me, just as I saw a woman of about the same age scamper quickly over the top.

A few moments later, when I reached the top of this hill , I saw the man and woman sitting together amicably in the sunshine at the edge of a large clearing, on a spot overlooking the river (since nothing has leafed out yet, there is a fine view of the river through the brush). Not wanting to intrude, I just walked around for a bit to see if there might be anything emerging for me to photograph, when I spotted this curious construction that looked like it had been put together maybe last year. Not far from it were some blackened chunks of wood as though someone had enjoyed a little campfire there. I don't know what to make of it, but I like to think someone was overcome with a mix of artistic and pagan impulses and just had to make this rustic shrine.
Posted by Sharon Parker at 10:03 PM