Of cabbages and eggs

I have tried using natural materials to dye Easter eggs in the past, but my kids recall better than I do that they didn't really turn out that well. They not only lacked the intense color of the artificial dyes, but they didn't have much color at all. However, I didn't feel like buying egg dye, and since my teenagers don't take much interest in doing these little holiday projects with me anyway, I figured I would just try again. Besides, I had already bought some red cabbage at the co-op, and I had a whole jar of turmeric, which I never use for anything.

So I got some directions from the Minnesota co-op Lakewinds Natural Foods and tried again. Noting that they recommend leaving the eggs in the dye in the fridge overnight, I did just that, limiting myself to two colors so I wouldn't have a fridge full of cups of spillable liquids. And I think they turned out pretty well!

The first photo shows the eggs with red cabbage to produce a pretty robin's-egg blue, in the second photo they're sitting in water with about a tablespoon of turmeric powder. Both were mixed with boiling water and a tsp or so of white vinegar. I increased the amounts from the original recipe because I assumed it was for one egg in one cup of liquid. 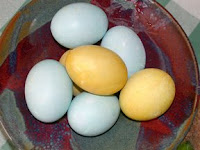 The third photo shows you how the colors turned out.
Posted by Sharon Parker at 3:20 PM