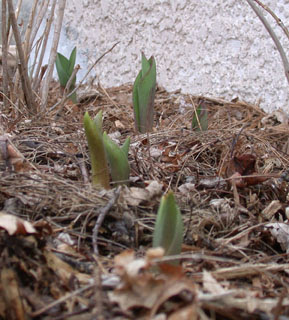 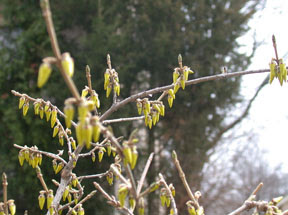 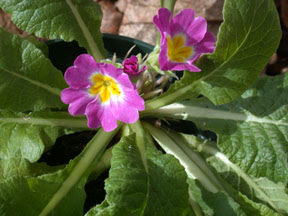 The weather has been mild here for some weeks, but noticeable signs of spring have been few, until now. I suppose their seeming sudden appearance has something to do with our several days of rain, which kept me from wandering outdoors and poking around for these tell-tale signs, so now it seems of a sudden that there are green buds and tulip tips and such. I am participating in a swap on Swap-bot called "Extreme Close-up Photo ATCs," the idea being to take close-up photos and then crop them down to ATC size. The fun of this swap has been that it has given me a little extra push to get out and look for things to photograph, and not the grand vistas or stunning but cliche'd sunsets, but to get up close and personal with my surroundings. So here are some of the photos I have been taking in anticipation of this swap.

The first one shows the tips of emerging tulips, which I planted last fall shortly after we moved into this house.

The next one is of forsythia buds. I dug up the forsythia and moved it with me, so it is a great relief to see such robust evidence that it survived its late autumn transplanting.

The third photo is of some primula blossoms, which are actually on a houseplant that I set out by the back door about a week ago to get it used to the outdoor conditions so I can transplant it into my garden. It seems to be liking it just fine out there!
Posted by Sharon Parker at 11:15 AM