A walk in the wildflower garden 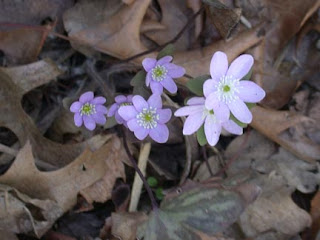 My husband and I enjoyed a visit to the Eloise Butler Wildflower Garden on Saturday. They were celebrating the 100th anniversary of the garden, founded by botanist extraordinaire Eloise Butler back in 1907, right in Minneapolis's North Side, in the middle of Theodore Wirth Park.

We watched as a costumed interpreter portrayed famed botanist and plant namer Carl Linneaus, followed by a brief ritual tree planting by our mayor and some park board people. Then we skirted around the small crowd and went for a leisurely stroll through the garden, stopping to admire this beautiful blue hepatica as well as several other spring ephemeral wildflowers along the way. (For more wildflower photos, see my Flickr page)

We sat awhile on a bench in the shade (it was a very warm day), and listened to a cardinal calling repeatedly from on high; a little girl talking excitedly to her mother about something she had sited, "I have eagle eyes, I can see 'em"; the trill of a red-winged blackbird in a nearby wetland just outside the garden; the distant, faint hum of traffic, reminding us that we have not left the city; and two women talking, seemingly oblivious to the tranquility all around them -- one was nodding and murmuring in an understanding kind of way as the other said, "so I said, 'fine, do this other thing, I'll support you, but I don't think it's a party, it's hard.' " We also heard other bird sounds that I could not identify.

All in all, a lovely couple of hours.
Posted by Sharon Parker at 12:06 AM