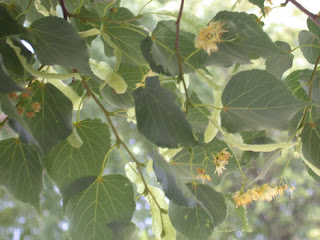 While riding my bike in the neighborhood recently, I noticed a strong sweet perfume in the air and began to look around for the source. It was well past time for lilacs or flowering crab trees, so I was peering into the gardens nearby and finding nothing to explain the luscious fragrance that seemed to be everywhere around me. Then I noticed that I was on a street lined with linden trees, and they were blooming. Linden blossoms are wonderfully fragrant, and because they bloom in late June when the leaves are fully out, and they are somewhat small (less than a half inch across) and yellow, they tend to blend in with the leaves until you look right at them, so I always smell them before I see them.

In Minneapolis, the forestry department has adopted a plan of planting a given street all with one type of tree, but varying the trees from one street to the next. In this way they preserve the urban aesthetic of orderly symmetry and repetition while at the same time following the sound horticultural policy of diversity so we don't have all our trees wiped out by a single disease, as has happened in many places with Dutch elm disease.

The linden tree used in street planting is the European little-leaf linden, or Tilia cordata, a close relative of the American basswood, Tilia americana. At our previous house we had a basswood tree, and I discovered that it bloomed about one to two weeks later than T. cordata and, unfortunately, this particular basswood was somewhat shaded on its lower branches, so the flowers tended to be held up high in the tree where they were harder to see. I don't think they were as fragrant as T. cordata, either, but it may just have been because the blossoms were not as abundant or as close as the street trees.

This photo was taken just yesterday and the blossoms are a bit faded already. There were other branches with more flowers than this, but it has been so windy lately that it was hard to get a photo that wasn't blurry!
Posted by Sharon Parker at 5:33 PM 1 comment: