Mushrooms on a stick 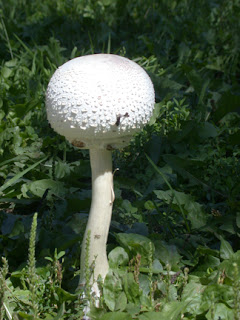 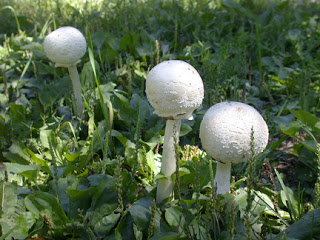 After two months of a drought and a heat wave here in the Twin Cities (and elsewhere, I know), we got hit by rain, rain, and more rain in August. And suddenly all these mushrooms are sprouting up in people's yards everywhere. I often get mushrooms in my yard because I use a lot of woodchips for mulch and they must be filled with spores, but lately I've seen mushrooms everywhere, including in grassy lawns. I headed out yesterday morning with my camera to get some pictures, and it being a sunny, dry day, I didn't find very many mushrooms anymore, but then these funny-looking ones showed up on the strip of lawn between the sidewalk and the street (we call it the "boulevard" in Minneapolis).

After taking these pictures, I went to the library and got a mushroom field guide, and I also looked on the Web, but I haven't found anything that looks quite like these. Maybe they're a variation on something that usually has a more traditional dome-like cap. But I get such a kick out of these with their perfectly sperical balls on such a long stem.

It's Minnesota State Fair time, and the fair is especially known for offering things on a stick (mostly food, but others have used the concept for marketing other things -- like the art institute handed out images of art from their collection, printed on cardstock and glued onto a flat stick, and called it art on a stick). So I just can't help but noticing how much these look like something you might see at the fair.
Posted by Sharon Parker at 8:23 PM No comments: 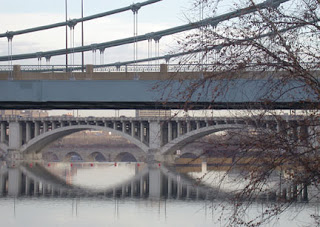 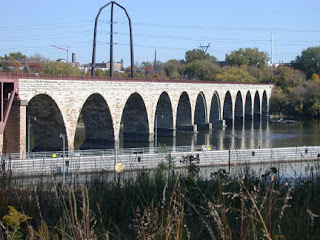 The historic Stone Arch Bridge, in the background of the first photo and shown again in the second, was built in 1883 and carried freight trains over the Mississippi in downtown Minneapolis for almost 100 years, until 1978. The late I-35W bridge that now litters the river was built just 40 years ago.

It seems to me that not only are the old-style bridges like these (Hennepin Ave., Central Ave. and Stone Arch) with their arches and/or suspension cables sturdier than the long slender unsupported span of the freeway bridge that was, but far more aesthetic as well. They just don't build bridges like they used to. Or maybe they just don't take care of them like they used to.

Many of us here in Minnesota are now in that angry after-event phase of looking around for someone to blame. It's tempting to point fingers at our no-new-taxes governor, Tim Pawlenty, for his stinginess when it comes to the state's infrastructure, as well as other things. But local blogger Rich Broderick makes a strong argument on the Twin Cities Daily Planet that the neglect of our infrastructure is a nationwide problem that goes back much further than that. Who wants to spend taxpayer money on boring things like taking care of bridges and highways when there are wars to be fought and tax cuts to dish out?

It reminds me of the time years ago when one of my girlfriends moved out to her own apartment for the first time and whined about having to spend her money on boring things like toothpaste. She, however, figured it out before she had to spend much more on even more boring things like dental work.

But the question remains, will American voters and the politicians who court us figure it out before another tragedy strikes?
Posted by Sharon Parker at 3:36 PM No comments: