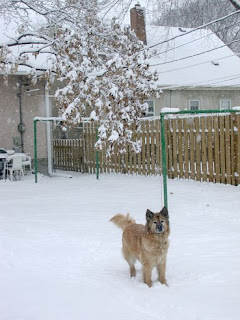 Yesterday I was walking my dog, Brigit, on almost-dry and clear sidewalks, today everything looks like this! Such is a Minnesota spring. I can't really say that I mind, it's so pretty and it'll be gone in a few days. I went out with my camera after walking the dog and took a few more pictures, which are posted on my Flickr page.
Posted by Sharon Parker at 12:00 AM No comments: Links to this post 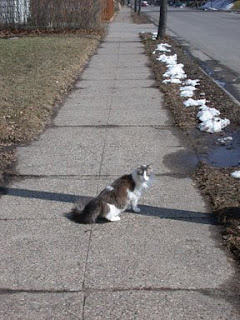 When I was a kid growing up in the St. Paul, Minn., suburb of Roseville, I used to stay overnight at my cousins' house in Minneapolis on Thanksgiving weekend. They lived on Penn Ave. S., near Minnehaha Creek, in a modest but nice neighborhood. I recall being particularly impressed by the fact that they had sidewalks.

In Roseville, if you went for a walk, you strode down the middle of the street; but in the city, there was this marvelous paved way just for pedestrians. It was so nice to walk with my cousins to a little store only a couple of blocks away and not have to worry about cars en route.

It was so civilized.

I now live in Minneapolis, and sidewalks are still one of the reasons I like living in the city. But lately I have found myself walking in the street more often than not when I take my dog for her daily stroll; the sidewalks have been treacherous, as small patches camouflage themselves among the shallow puddles and wet pavement.

I am not a perambulator; I prefer to walk somewhat briskly. I engage in these daily walks not only for the fresh air and to see and hear the crows, cardinals and woodpeckers that enliven my neighborhood, but also to raise my heart rate just enough and work up a bit of a sweat to burn off the fat I have accumulated over the years. So when I have to slow down to a careful crawl to avoid injury, I am more than a little dissatisfied with the whole experience.

The dog doesn't seem to mind; she has more time to sniff when we go slow. Conversely, she is not happy when I lead her out onto the rough but unslippery asphalt road, where there are no smells to engage her. I compromise on these occasions and take her back onto the sidewalk whenever I see a stretch that is dry. In fact, our route is pretty much determined by the condition of the sidewalk on any given block: Shall I turn or go straight? How does the sidewalk look this way compared with that?

My own 40 feet of city sidewalk is nearly always clear and dry. I have no qualms about sprinkling grass-killing deicing salts after shoveling to ensure that no slick spots remain behind. I do buy a product with minimal environmental impact, at least among those available at my local hardware store. But I am more concerned with safe sidewalks than with keeping the grass healthy. It's easy enough to reseed it in the spring.

And I am looking forward to more of spring and less of this not-quite-spring-not-quite-winter that plagues my daily walks with uncertainty. I enjoy the kind of surprise that involves sighting an unexpected migrant bird passing through the neighborhood, but not the sort that has me finding myself suddenly sprawled on the pavement.
Posted by Sharon Parker at 6:57 PM No comments: Links to this post 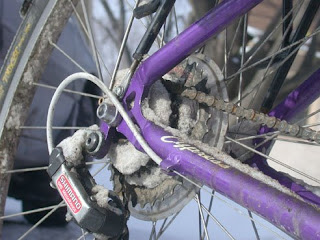 When you ride your bike in winter, people think you’re a lot tougher than you really are. They don’t realize that you get warm from the exertion: as long as you’re dressed for the cold, your ears are covered and you have good gloves, it’s really not so bad. Though I’ll admit that when the air temperature is in the teens and below, it stabs at my fingertips no matter what gloves or mittens I wear. And when it dips below zero, that’s enough for me to leave the bicycle in the garage.

But I keep finding that I miss my daily bike rides when I don’t get out. Like today, for example, we had a new snowfall, and I have deadlines that make me feel pressed for time. So I got in the car and drove to a different coffee shop in my old neighborhood --because I still needed to get away from the distractions I encounter at home with two teenagers, three cats and a dog, to finish reading a book from which I am taking notes for something I am writing for my quarterly magazine.

I went to the other coffee shop not only because I also like that one, but because I just can’t justify driving the short distance to my local spot. If I’m going to drive, I must go somewhere farther! Now I’m hoping the streets will clear themselves well enough for me to venture out tomorrow -- I especially hate going two days in a row without riding my bike.

It’s not that I’m trying to prove something, it’s just that this coldest winter in seven years has also seemed to me one of the sunniest, and that persistent bright sunshine keeps drawing me out in the afternoons. That and the fact that my home office is located in the basement, with a small north-facing window above my head. Through it I can see the sunshine on my neighbor’s fence and it makes me think about the big south-facing windows at my neighborhood coffee shop -- not to mention its convivial air and the baristas who prepare my latte when they see me rolling up on my bicycle (until I decided to switch to green tea, causing some confusion for a time), and the other regulars whom I enjoy seeing and visiting with.

Sometimes I will encounter other winter bicyclists and we would greet each other as though we were members of the same club, even though we had never met before. I have exchanged winter bicycling tips and routes with some of these, as well as the general comeraderie of people who share the same eccentric pursuits.

At one point I had noticed that my bike was getting harder to pedal, and I wondered if the tires were somehow more sluggish in winter. Then, after a fellow I had talked with about winter bicycling had mentioned the need to clean the gears off, I inspected mine and found them perfectly packed with dirty snow and sand. On a mild day, I rinsed them off with warm water and then re-oiled the chain. It operated so smoothly after that, I almost felt it was too easy!

However, the spilled water at the bottom of the garage flowed under the door, and when the temperature dropped precipitously that night, I found the garage door frozen shut and couldn’t get my bike out for several days! It was, in fact, really too cold for bike riding that week, and at the end of the week I persuaded my teenage son to get the door open for me and soon I was back in business.

Now it is March, sometimes the snowiest month in Minnesota, so who knows how much bicycling I’ll be able to do. But soon enough it will all melt away. I’m looking forward to easier, longer bike rides this spring!
Posted by Sharon Parker at 7:07 PM No comments: Links to this post