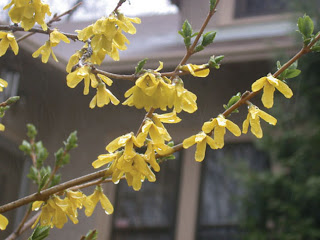 One of my favorite harbingers of spring in Minnesota is the cheery yellow forsythia that I planted in my front yard. The little bush is only four years old, having been planted as bare root stock in the summer of 2004 -- it looked like a lifeless twig when it arrived. I then dug it up and moved it when we moved in September 2006, so I'm pleased it's not only still with me, but establishing itself nicely in its new home.

It just started blooming a few days ago, around April 20. In most years it has bloomed by early April, usually on my grandmother's birthday, April 9. But spring seems to be a little reluctant this year; not only has it been cold so far this spring, but we once again have a threat of snow in the forecast. However, in 2005, when the forsythia was blooming on April 9, it snowed on May Day! So who knows what can happen in a Minnesota spring!

I took this photo today when the rain was just a light mist. Too wet for bike riding, but OK for a quick stroll around the yard to see how the gardens are coming along.
Posted by Sharon Parker at 7:26 PM