Eagles in the city 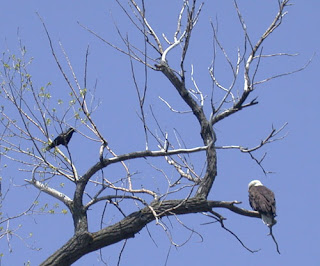 We have a nesting pair of bald eagles in South Minneapolis, right near Hwy 62, and today I spotted this one perched in a tree on the banks of Lake Nokomis, in a residential neighborhood about 6 miles from downtown Minneapolis.

I was riding my bike around the lake when I looked up at this tree because I sometimes see cormorants perched in it, and they are so big and funny looking that I just get a kick out of them. When I first saw the eagle its head was down and its back was to me (as it is here), and so it didn't register at first what I was really seeing, I just thought, wow, that is a really big bird in that tree. Then it lifted its head and I was just awe struck -- an eagle! Right here in my neighborhood!

The crow in this picture was first perched on a nearby tree, and it cawed constantly at the eagle. Then it flew over and took a couple of dives at it, then perched where you see it here, and continued to caw. Finally it flew again, took one last dive at the eagle, then flew away. The eagle was preening itself the whole time, ignoring the crow.

Other people walking around the lake stopped to look at it, including a woman who lives very nearby and who comes to look at it often -- she says it likes to perch in that tree because there are dead branches, thus fewer leaves to block its view of the lake and the fish. All of our city lakes are stocked for fishing, so I'm sure there's plenty there for it to eat -- probably walleye and northern and tasty fish like that.

A couple that came walking by said they had just been over by the nest (about a mile or less away from this site) and that there was another eagle sitting on the nest. That one is larger than this one, they said, so it's probably the female. Sitting on the nest? Sounds like we'll have more eagles soon!
Posted by Sharon Parker at 9:49 PM