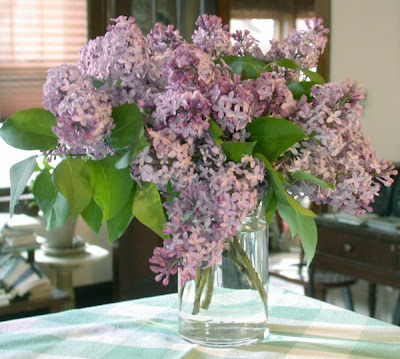 We are surrounded by lilac hedges, courtesy of two of our neighbors -- retired single men who don't seem to notice or care about their lovely bushes. So I knew I could gather a bouquet and nobody would mind!

When the kids used to gather lilac bouquets at Grandma's house, they always wilted only an hour or so after being placed in a vase. So when I read somewhere that you're supposed to pound the stems with a hammer to get them to take up water, I tried that and it seemed to help. But later I learned that doing violence to the stems in that way was not good for the cuttings, and indeed it only seemed to extend the life of the cut lilacs by a few more hours.

These lilacs were cut yesterday and I photographed them today. You can see that even the leaves still look fine.

I wish I could remember where I read this, but here is the technique: Bring a pitcher of very warm water with you out to the lilac bush, make clean cuts with a bypass pruning shear (which doesn't crush the stem), strip off the lower leaves and plunge the cutting into the warm water, immersing as much of the stem as possible (right up to the blossoms if you can). Ideally you leave them in the warm water overnight, but since the water doesn't stay warm that long anyway, I don't think it matters if you transfer them to a vase, also filled with warm water, which is what I did. When I transferred them I made sure to strip off any leaves that would be under water so they wouldn't rot and spoil the water.

I know that some bouquets do fine with only enough water in the vase to cover the bottom inch or so of the stems, and maybe after a day or so of curing, these lilacs would be fine that way too, but as long as there are no leaves under water, I am keeping the vase as full as I can so the whole stems remain immersed.

Lilacs last such a short time even on the shrub, so I like to keep them as long as possible indoors!

(Note added on Thursday, 5/22: the lilacs are just starting to wilt this evening, so they lasted about 5 days.)
Posted by Sharon Parker at 2:51 PM