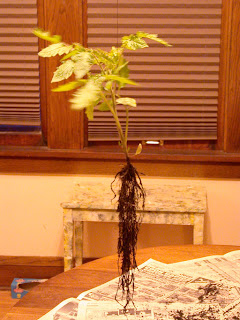 Actually, this poor hapless tomato plant survived its ordeal and is thiving in its pot once again, with dirt covering its roots. I had purchased it for the purpose of drawing it for a new gardening column I am writing for the Minneapolis community newspaper the Southside Pride.

So you may be surprised to learn that I did not write about tomatoes for my first column, slated to appear in the May editions (they publish three neighborhood editions each month). Rather, I wrote about dirt. That is, I wanted to address the fundamental "elements" of gardening, wishing to also recall the traditional four elements: earth, air, water, fire. So, for the first column I wrote about earth/dirt in the context of organic gardening -- for example, that you feed the soil, not the plant, by making compost and adding it to the garden.

But I didn't really want to draw an image of dirt or compost to go with the column. So since I started by telling about my first gardening experience, in which I grew a couple of tomato plants, I decided that a drawing of a tomato plant would be just the thing. And I wanted to draw it roots and all not only because I like those sorts of botanical drawings, but also to convey the sense of reaching into the earth.

And the only way, it seemed, to prop up my model so that I could do the sort of drawing I wanted, was to shake out the roots and then suspend the plant from a ceiling light in the dining room. So there it hung, slowly twisting in the air until I found a way to stop it (by placing a clear plastic ruler on a lamp and setting that next to the plant; hard to explain, but it worked).

I didn't think to take a picture of the drawing before I brought it over to the newspaper, so I'll try to fetch it back when they're done with it and upload an image of it then.
Posted by Sharon Parker at 11:03 PM