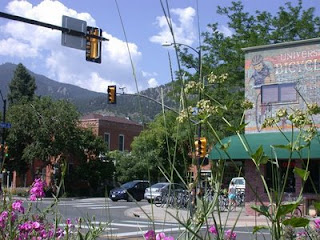 My husband was going to Boulder, Colorado, for a LOHAS conference, and I said, how about if I tag along? So here we are in Boulder. It's a lovely town nestled just next to the foothills of the Rocky Mountains, population about 100,000 -- just enough to make it a vibrant city, it seems. There's a pedestrian way through the middle of downtown, called the Pearl Street Mall. It goes for several blocks and you can't so much as ride a bicycle down it -- it's all for walking.

We went out Thursday evening to look for a place to eat dinner and discovered that there's a lively night life on the mall. We noticed a crowd gathered on the corner of Pearl St. and 13th, where a street performer was regaling them with some lively antics. He had recruited a few assistants -- two men who stood facing each other with their arms folded across their chests, and a woman to whom he handed various instruments, including a hatchet and, a little later, a lit torch. He then climbed up and stood on the men's crossed arms and it appeared that he was going to have the woman toss the items at him to juggle, which was a little hard to fathom! But then he instructed her to step a little closer, then closer still, then he had her hand him the hatchet, torch, etc. He said, "You didn't think I was going to have her throw those things, did you?" She looked relieved. But it was probably the guys he was standing on at that time who were the most relieved. Anyway, he proceeded to juggle the hatchet and lit torch and other object (I didn't notice what it was) quite artfully. We moved on after that.

Eventually, we went to a wine bar called The Kitchen, which was recommended to us by a fellow operating a small winery where we had stopped for a glass earlier in the afternoon. It was crowded and lively, definitely a hot spot in town, and Craig noticed that it was full of young people -- much younger than us, certainly. It was too loud for conversation, so we we mostly took to people watching, and Craig commented that there were mating rituals going on all around us. True enough. We enjoyed our stroll back to the hotel Bolderado in the cool of the night, played cards, and went to sleep, old fogeys that we are.

There are more photos on my Flickr page.
Posted by Sharon Parker at 6:31 PM