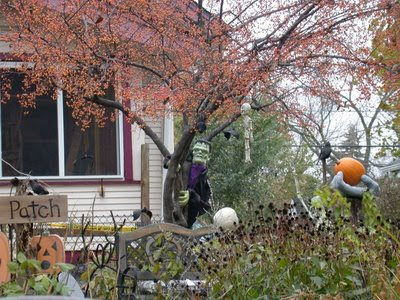 I came across my notes from last Halloween, a rare experience -- the finding of the notes, not the taking of them. I try to keep track of how many kids show up at our doorstep demanding sugar so I know how much to buy the next year. Then it occured to me that weather may play a role in those numbers (we didn't have a lot of trick-or-treaters in 1991, for example, when a monster blizzard dumped more than two feet of snow on the kiddies), so I made a few notes about that as well. I love that sort of trivia, so I'm sharing it here (plus it gives me a way to find it again if I lose my handwritten notes!) -- my report from last Halloween in bucolic South Minneapolis (the photo is of a yard in my neighborhood that I found especially charming).

The weather was windy and dry, with temperatures in the 40s by evening. The high that day had been 62 degrees, the low 44 -- very similar to today's forecast for the Twin Cities, except we don't seem to be getting any wind today.

I lit the candles in our pumpkins at about 6 p.m., when it was just starting to get dark, placing votives inside glass holders to keep the wind from blowing them out; in one pumpkin I placed a partially burnt down pillar candle, so the sides of the candle protected the flame from the wind. Thanks to the pushing back of the return to Standard time (finally! I've always wondered why they had us setting the clocks back on the Sunday before Halloween!), we didn't get any early trick-or-treaters interrupting our dinner. At least, I'd always thought that the early onset of nightfall was the reason the smaller children headed out at such an inconvenient time.

I had handed out both balloons and candy and made a note that the balloons were very popular. I should have read that sooner! I may go out and buy some balloons yet today (I think I had some halloween-themed balloons, which I imagine I can find again at the local Walgreens.)

My final note was that there were no dominant character themes among the small kids.

I wonder if we'll see any politically themed masks this year? I can think of a few scary ones, depending on your particular leanings! But that's another topic, and one that I'm pretty darn tired of, so I won't go there now.

Happy Halloween, whoever may read this!
Posted by Sharon Parker at 11:21 AM