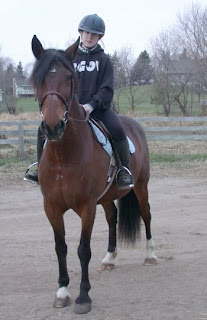 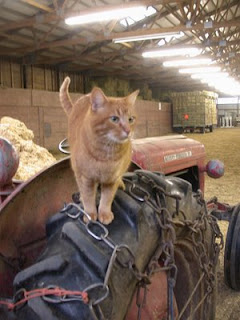 My daughter has a horse, a sweet mare named Tempest, which she stables in the suburb of Lino Lakes, about a 35-minute drive from our house. Today I drove her there so that I could take some pictures of her and her horse for our Christmas correspondence. As usual, the pictures aren't all that great because I didn't plan ahead so I would have a spare battery charged up, and the battery runs low quickly because of low light conditions, which is especially a problem when you are trying to photograph a moving target. And it doesn't help that I get distracted and photograph other things like this barn cat on a vintage Massey-fergusen tractor, thus using up precious battery life.

There are three barn cats at this stable, two that are still kitties and this adult cat, Tiger, who walked up to me and meowed demandingly while I was waiting for Nora to finish warming up her horse before bringing her outside, even as the natural light was quickly waning.

The kitties, named Snickers and Tommy, are orange and white. Tommy came outside to greet us as we arrived, then immediately started pouncing on bits of straw. Nora scooped him up and carried him into the stable with her, and as she paused to greet the various horses who stuck their muzzles out of their stalls as we walked by, some of them would stretch their necks enough to put their big horsey noses into the cat's soft fur. The cat didn't seem to mind this at all.

When we got to Tempest's stall, Nora handed the kitty to me, and he immediately snuggled into my arms contentedly and watched as Nora led Tempest out of her stall and prepared to groom her before riding. After a while the cat got a little restless, but didn't seem to want to jump down, so I moved closer to the horse and the cat climbed up onto the horse's back. Tempest still had her blanket on and the cat just settled right down.

In order to remove the blanket, Nora picked up Tommy and placed him on the horse's head, where he proceeded to play with Tempest's ears, which she didn't seem to mind. I only have blurry photos of that, the light was just too low inside the stable and I didn't want to use a flash and startle the horses.

After Nora put Tommy down and he scampered off and disappeared, I asked where he had gone.

"Probably in one of the stalls," she said.

"Don't the horses ever step on the cats?" I asked.

"They're very careful. They can feel the cat around their legs," she said. But then, after a moment or two, she added. "I have seen barn cats with kinks in their tails, though."
Posted by Sharon Parker at 10:17 PM