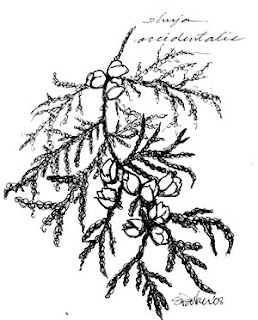 (Here's my latest garden column in the Southside Pride.)

A small item in the fall newsletter of the Minnesota Native Plant Society caught my eye recently; it impugns the popularity of filling our outdoor containers with black spruce tips for the holidays. Even though the gathering of spruce tips is regulated and licensed by the Minnesota Department of Natural Resources, the writer is concerned that the popularity of the ubiquitous mini trees could eventually put undue pressure on the peat bogs where they grow.

“I would rather imagine black spruce growing in a native peat bog than being managed as a crop, and, as I see it, every acre of cut spruce tips is an acre that could be left in a natural state,” writes Elizabeth Nixon, chair of the society’s conservation committee.

It appears that the practice poses no imminent ecological problems, thanks to the DNR’s oversight, so if you really adore them, by all means buy spruce tips from your local garden center. On the other hand, if you see a guy selling bundles of them off the back of a pickup, don’t do it.

I have used spruce tips in past years, but somehow the combination of their omnipresence this time of year, which makes me just a little bored with them, and the way they so readily let fall a shower of little needles, which makes me a lot annoyed with them, has led me to seek alternatives.

Besides, this is a gardening column, and, unless you have a peat bog in your yard, you can’t grow them yourself.

On the other hand, several of the the more unique and, to me, more attractive seasonal displays feature plants you can grow in your yard — hardy shrubs that not only offer cuttings for decorating, but food and shelter for wildlife, and a more attractive landscape to enjoy all winter long. The following are just a few that you’ll find at garden centers now as cuttings, and again in the spring as landscape plants.

Winter greenery
You may already have white cedar (a.k.a. arborvitae) or juniper or other small evergreens growing next to your house — these common foundation plantings may even strike you as nothing special, but their branches are attractive and fragrant, and a few discreet cuttings won’t hurt this time of year. They won’t look so good if you just stick them straight up in a pot as you would spruce tips, though. Think of them as you would foliage in a bouquet, surrounding and visually supporting the more colorful upright elements.

In fact, it helps to compose your winter pots using the same three design components as you would a pot garden in summer: something tall and spiky, something bushy and colorful for the middle, and something spreading or trailing. Evergreen branches, whether cut from your foundation plants or gathered from the ground at the Christmas tree lot, may serve best in that third capacity, as a trailing or spreading feature.

Tall twigs
It’s the bundles of red dogwood twigs that first got me thinking about growing my own winter decorations. You can really put out the money for a sizeable mass of these, and they look so stunning standing up through the snow, why wouldn’t you want them in your winter garden anyway?

Native to our wetlands, this tall shrub known by the species name Cornus sericea (or sometimes called Cornus stolinifera) will thrive in any garden soil. There are several cultivated varieties, some of which have been developed at the Minnesota Landscape Arboretum.

Red-twigged dogwood will grow in full to part sun, prefers a neutral to acidic pH but will tolerate slightly alkaline soil, and grows 6 to 8 feet tall with a spread as wide or wider, but there are some smaller cultivars. It can form a bit of a thicket, though the cultivated varieties are likely to be less aggressive than the native plant. If you want to take a lot of cuttings in the winter anyway, that shouldn’t be a problem. To keep the brightest red stems coming, prune out the oldest (dullest) ones in the spring to stimulate new growth (it’s the new stems that have the brightest color). The small, somewhat discreet flowers are white, followed by white berries that the birds will happily devour.

Berry delights
Winterberry is really a form of holly that is native to Minnesota. Unlike the spiky-leaved hollies you find at a florist shop, this one, Ilex verticillata, is deciduous — it drops its leaves in the fall, leaving behind dark branches sporting bright red berries. It’s another wetland plant that doesn’t require a bog to thrive — in fact, it can spread somewhat aggressively in wetlands, but tends to stay put more in regular garden soil. It’ll grow in sun or partial shade, but you’ll need both male and female plants to set fruit.

Common winterberry, the native shrub, will grow 6 to 10 feet tall and as wide, but there are many cultivars, some of which are quite compact. The leaves are not terribly attractive, but most varieties turn a nice dark red color in fall and tend to drop early, revealing the colorful berries. Some varieties may have orange or yellow fruit.

Roses are not usually selected for their fruit, but some do develop brightly colored hips, as they’re called, that can be as showy as holly berries. Since we usually buy roses in spring or summer when they are blooming, we won’t see what the hips look like at that time, so if you want that added winter interest, select a variety that is known to have showy hips.

Fortunately, the roses with the most colorful hips are also among the hardiest and most disease resistant. The University Extension service has an excellent pamphlet on hardy roses for Minnesota with a chart listing many varieties and their various characteristics, noting any that have particularly showy hips.

Of course it’s not practical for most of us to grow all of these shrubs in our city gardens, but if you can find room for one or a few of them and plant them together to form a winter vignette that you’ll see from your window, it’s sure to brighten those bleak days after the holiday décor has been put away.
Posted by Sharon Parker at 10:24 PM No comments: Links to this post