A god's garden in a pot, or just some grass for a cat 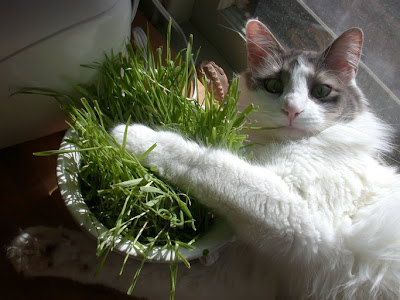 For my garden column in Southside Pride in March, I'm writing about starting seeds indoors, which reminded me of Adonis gardens, which I first read about in Eleanor Perenyi's book Green Thoughts: A Writer in the Garden. She explained that women in ancient Greece and Rome would plant little pot gardens of wheat, barley, lettuce and fennel for the festival of Adonis, which I took to be in the spring, like Easter. The seeds would grow quickly, then became potbound and die, symbolizing the short life of the handsome young demigod and lover of Venus/Aphrodite. And then the women would toss them out into their gardens.

Except it turns out I was mistaken on several points. I thought it was a sort of fertility thing, and it even made sense in a way -- if you started a pot of seedlings and then tossed them into your compost pile while they were still green, they would add nitrogen to the pile. But when I started looking for more information about Adonis gardens, I learned that the festival most likely took place in the summer and was meant to symbolize the wasted and unfertile life of the young hunter -- for he died without fathering any children. Actually, I made up that last part (I'm pretty sure he had no children), but it makes sense to me. The original Adonis gardens were just tossed into a stream or something, they weren't turned into anything useful, symbolically or otherwise.

Then I got out the book and re-read the passage on Adonis gardens. Perenyi claims that the custom of growing these temporary gardens in pots on the rooftops is the origin of pot gardening. And she also claims that a Christianized version of the old Adonis cult continued in Sicily into the 20th century, when women would plant pot gardens to decorate the church on Easter. I guess that's where I got the idea that growing grass for our Easter baskets was a remnant of this old pagan practice. So I must have put these bits and pieces of information together with my own thoughts about turning the spent gardens into compost and made up my own version of the custom. I guess that's how rumors and misinformation get started!

I still like the idea of planting my Easter basket as a kind of Adonis garden, even if the precedent for such a practice is unclear.

This photo is of my young neutered male cat, Tres, doing his imitation of Adonis frolicking in his garden. No, there is no catnip in this pot -- just wheat grass and alfalfa.
Posted by Sharon Parker at 10:33 PM 1 comment:

I am such a wimp

It's sunny out for a change, after a week or more of cloudy weather, and the temperature is in the upper teens. Not bad for February in Minnesota. I was going to bike to the coffee shop with my computer to do some writing, but after standing outside for a few minutes adjusting the dog's leash, I was feeling the cold on my legs. Besides, I couldn't find my long underwear -- not that I looked all that hard. So I tell my husband that I'm going to drive to the coffee shop instead.

So here I am at my neighborhood coffee shop when in walks our friendly neighborhood bike shop guy, Jim Thill of Hiawatha Cyclery. He's with a friend. He says hello and tells me that they've been biking "all around."

Oh, I say, did you bike the grand rounds? That's the route that loops through the Minneapolis parkways, about 50 miles if you do the whole thing, but I was just imagining the portion that goes around the lakes, which is still maybe 30 miles round trip. No, he tells me, they've biked out to the eastern suburbs, White Bear Lake and the like. Well, White Bear Lake is about 30 miles by freeway each way. And they've not only biked there and back, but biked "around" to other places as well.

When they get up to go, I ask, are you done now? Are you going home? I know that Jim lives in the neighborhood. "Well, I am," says Jim. "But he [referring to his friend] has a ways to go yet. He lives in Robbinsdale." That's about another 12 miles. The friend acknowledges that his legs are a little tired, but he is undaunted by the trek that remains for him. It's about 4:15, he's probably got an hour before it starts to get dark.

And I couldn't bring myself to bike the 1.6 miles to the coffee shop! I feel like such a wimp!
Posted by Sharon Parker at 4:22 PM 1 comment: 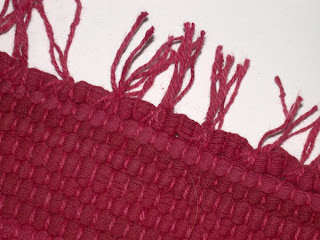 A while back I bought a large woven rug for the dining room, and soon discovered that, being floppy and not very heavy, it gets sucked up by the vacuum cleaner, but being a bit large (about 5X7 or thereabouts), it doesn't fit in the washing machine. And being a nice solid red, it showed all the dog and cat fur within a few hours of laying it down.

So, what to do? Well, I folded it up and deposited it in the basement to deal with later. Then I got the idea that I should cut it down to fit the landing on the basement steps at the back door. The space is about 38 inches square, so the usual washable rugs are never quite the right size to cover the whole area. I had to think about this for quite awhile, of course, to figure out how I would finish the cut edges. I thought I might sew a binding around them, but I didn't think I was likely to match the red. Of course, red things usually bleed the first few times you wash them, so maybe it didn't matter what color binding I used.

In the meantime, Hubby decided to just fold it and put it down on the landing anyway. He put a couple of the smaller rugs on top of it, and that wasn't a bad temporary solution, but it bugged me to have it sit there with its too-thick folded edge hanging over the edge of the step threatening to become a tripping hazard.

So I just cut it today -- it made two area rugs the right size for the landing, with a couple of little strips left over. After some looking around for a sturdy red thread to overcast the edges, I realized that the warp thread (string, really) would serve very nicely.

So I pulled some from the remnants and was using this to bind the side where I had cut across the weft, but when I got around to the crosswise side, where the warp threads were exposed, I eventually realized that it made more sense to pull some more of the weft pieces out of the way and make a fringe. I then knotted the warp threads by taking three from the top and three from the bottom and tying them together. That worked quite well and only took about 20 minutes, and was kind of nice little meditative exercise.

And it lays nice and flat on the landing, and is just the right size. Happy ending.
Posted by Sharon Parker at 9:47 PM No comments:

Artists' books at the Walker

Hubby and I went to the Walker to see Text/Messages: Books by Artists last Thursday and I thought it was fabulous. The exhibitions in the galleries that you pass through on the way to the artists' books were not my sort of thing so much -- severed body parts and phallic objects; you know, the usual Walker stuff -- so although I'd like to go back and have another look at the books, I'll be taking the elevator directly to gallery 7. Or maybe have lunch in Gallery 8 and then walk down to 7.

Text/messages is great, though, and even worth wading through the trashy "fine" art to get to. I found some of it quite inspirational, making me want to try something new when playing around with altering or constructing books, and some of it downright awe-inspiring, like the one with the intricately laser-cut notepad that had paper staircases and landings extending down from what was really just a regular legal pad attached to the wall. Wow. Sorry I can't tell you who made that one, I didn't take notes and I didn't see an exhibition catalog or anything like that. They did have some notecards featuring a few of the items, with information about events that go with the show, like panel discussions and a "Multiples Mall" sale of small DIY-press stuff.

You can get all the details on this page at the Walker Web site.

It's showing through April 19. Admission is free on Thursdays after 5 p.m. and on the first Saturday of the month.
Posted by Sharon Parker at 2:10 PM No comments: