Evidence that spring really is on its way 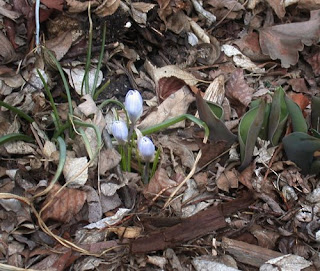 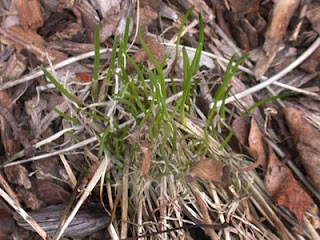 March has been dragging on, even threatening to spill over into April. So I was surprised and delighted yesterday when I was out walking my dog and noticed that my neighbor's crocuses had not only emerged, but were starting to bloom. These lovely pale blue buds look so sweet, don't they? This is on the south side of her house, which is on a corner, so she gets lots of sun exposure. When I toured my own yard to see if any of my crocuses or tulips were up, none of them had even emerged yet. But I did discover my chives a few inches high; those are on the south side of my house. I'm thinking now that in the fall I really must plant some bulbs along the south side so I'll get a little early color next spring.

Other signs of spring in Minneapolis I have noted lately:
• On March 15, my husband cleaned out the garage and got his bike out for the first time. He rode it to work the next day.
• On March 16, my favorite mailman started wearing shorts; although I didn't notice whether he returned to long trousers when the temperature dropped again. (I know, how could I not notice?)
• Also on March 16, I spotted ducks in the puddles around Lake Nokomis, even though the lake itself is still frozen.
• There are loads of robins everywhere. I really should get mealworms from the bird seed store for them, they say that there aren't many insects or worms about yet, and the robins and other birds need their protein.
• Yesterday, as I was biking around Lake Nokomis, I heard red-winged blackbirds trilling in the trees.
• The wild turkey in Minnehaha Park has become a more common site, and a couple of weeks ago we even saw four of them all clustered together. Then one day last week my husband witnessed a male turkey chasing a small red car! He said it ran pretty fast.

Today it's rainy and gray, but not too cold. The birdbath water remains unfrozen. But the Eloise Butler Wildflower garden, which usually opens on April 1, has delayed opening for a couple of days. It does feel like April today, though, so that's encouraging.
Posted by Sharon Parker at 1:45 PM