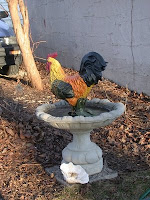 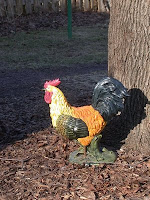 At one of our visits to Mom's house to help with packing and sorting for her upcoming move from a four-bedroom suburban rambler to a two-bedroom apartment, we came home with a rooster.

Not a rooster like the one that patroled a friend's hobby farm where my daughter, Nora, sometimes used to farm-sit when the owners went out of town. That rooster was aggressive and downright scary -- and loud. Nora said that it only took him three days to figure out where she was sleeping and then position himself outside her window each morning to let her know loud and clear just exactly when the sun's rays first peeked over the horizon.

My mother's rooster is made of resin and had quietly occupied a corner of her dining room since 2003, when it had come home with her after one of her daily mall-walking escapades. It was shortly after Dad died (on December 13, 2002) and she had begun walking about three miles a day, indoors at Har Mar Mall in Roseville. She would walk past a garden store that had the rooster on display, and the colorful fellow had become a welcome and cheery sight on those daily walks.

Then one day it wasn't there, and she missed it. So when the store got another one in stock, she immediately bought it and brought it home. It's the sort of thing Dad would have gotten a kick out of, and probably on some level it made her feel a little connection to him.

And that may be why, when she said she was ready to part with the rooster, I claimed it. Neither of my brothers showed the slightest interest in it, and they may not have known how Mom came by it. To me, it's not only a colorful and whimsical garden ornament, something to jazz up our yard's feng shui with a shot of rooster energy, it's also a token of my parents' playful side; something that brought my mother a bit of cheer at a sad time, and a reminder of my father's mischievous nature.

It made me think of the time Dad bought my mother a stuffed animal, and soon after, she kept finding it in unexpected places around the house, posed in odd postures. Soon after the rooster came home with us, my husband started to notice that it showed up in different spots in the backyard each day when he came home from work.

Then I began to find it in new places when I would look out the kitchen window shortly after Hubby got on his bicycle and headed off to work. Our teenage son observed all this with his usual amused detachment. Or so it seemed. Then one day when my husband was still at work and I came back from a bike ride, I opened the garage door to find it inside the garage.

And so it continues to rove about the backyard, and seems to be enjoying its new habitat, spreading its animal energy wherever it goes; and maybe, just a little, channeling my father's playful spirit in the process.
Posted by Sharon Parker at 4:39 PM