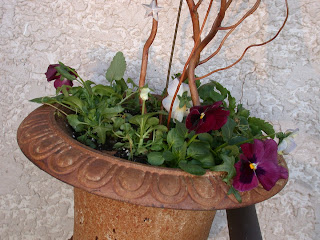 Last weekend, we were at our local liquor story to stock up on wine, and we noticed that there were pansies and violets in the planter by the door. The sales clerk, a buxom, amiable woman who would look right at home serving pints in an old-fashioned pub, said she planted them and told us we could get some of our own at Wagner's, a Minneapolis greenhouse that grows their own flowers.

So on Monday, I headed over to 60th and Penn, just a few miles west of us, and bought two flats of pansies. Then my son, Martin, and I headed out to Mom's house to fill the two little planters in front before the Realtors' open house scheduled for Tuesday. Mom had finally got through the ordeal of painting and floor refinishing (a few weeks during which she barely had a place to sit) and her Realtor had listed the place at last on Monday.

The house has pinkish siding and a brick red door, so I selected pansies that picked up on these colors. Then I grabbed a bunch of dogwood twigs from my winter outdoor arrangement (I had long since tossed the evergreen bows from that onto the compost), and put them in the pots with the pansies to give the whole arrangement some height. It looked pretty good, and Mom liked it too, and then she said we have to go, someone's coming to look at the house in about ten minutes.

Mom called on Wednesday to tell me that she sold the house! In fact, she had two offers, and selected the one from the family with three children (the other couple had no kids), even though it meant a little less money for her because they requested help with closing costs. But she so liked the idea of providing a home to a family, and she told me that the oldest child was 8, the same age as my big sister (our oldest) when they moved into the house in 1960, and the younger two, twins, were 3, the same age that I was at that time (I'm the baby). So I guess it just felt to her that it was meant to be.

I planted some of the remaining pansies in my pot on the front steps, pictured here, along with the corkscrew willow branches I've had for about a year now, and I added a dangly ornament (you can see the star at the bottom of it here, I'll try to get a better picture this afternoon when the sun is shining on it). I had selected the plants with the most open blossoms for Mom's pots, so these aren't as colorful just yet, but I'm sure they'll be blooming like crazy in no time. They're getting lots of sunshine, and I mixed some granulated organic fertilizer in with the soil when I planted them.

It felt so nice to get out in the garden and do a little cleaning up and planting yesterday. I am deliberately doing just a little at a time because I don't want to wake up with a painfully stiff knee and an aching back in the morning! But it's only the middle of April, so I have lots of time, right?
Posted by Sharon Parker at 12:28 PM