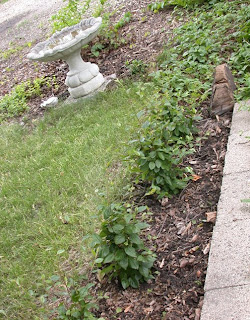 Yesterday I was rinsing out and refilling the birdbath in the backyard, and thought I should probably water my one-year-old cotoneaster hedge, which I planted as bareroot stock last summer. It also needed weeding, but I didn't think I had time to do that too. I don't have a sprinkler that will cover a long narrow strip like this hedge, so I started to just stand and water it with the hose, one little shrub at a time, thinking that would be better than nothing and I could do it fairly quickly.

Pretty soon I noticed that some of the leaves looked kind of chewed, so I examined them more closely with my left hand while holding the hose with my right. Not finding any obvious infestation, I started to use the hose, to which I had attached a spray nozzle, to rinse the leaves, paying special attention to any that were curled or chewed, rubbing my thumb over the undersides of leaves to scrape off any aphids that may have taken up residence there. I figured I could do this and water them at the same time.

Then I thought, well, as long as I'm doing this, and the ground is getting softened by the water, I may as well pull up the weeds too. After about a half an hour, I had watered, weeded, and debugged (more or less, as far as I could tell), the whole hedge. The weeding, in particular, I had been putting off for weeks, and it took just a half an hour -- while getting the watering and pest patrol taken care of at the same time.

I always seem to get the most done when I am trying to do less!
Posted by Sharon Parker at 5:36 PM