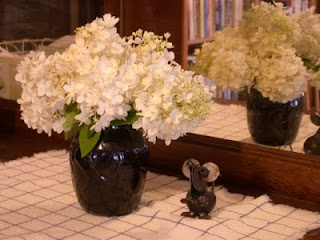 Yesterday I stopped over at my friend Judy Anderson's house to look over her pottery, which she had on display in her front yard in an art-in-the-garden sale. I enjoyed touring her garden as much as looking at all the beautiful pottery. You can see some of it for yourself at her Web site, Dragonfly Guild.

Craig selected a mug for his morning chai -- when we were up at the cabin a couple of weeks ago, he had complained that none of the mugs in the cupboard were quite right for his tea (they were all a little on the small side, I guess), so I had suggested we buy him a handmade mug to keep up there. We looked a little when we were in Bemidji, which is quite an arty town, but he didn't see anything that struck his fancy. (And we didn't get to the gallery that our friend had recommended because it was surrounded by torn-up streets. What was it called, Terry? Wild Cat, or something like that. I want to visit that one next time we go up north.)

So when Judy announced her sale, I said, let's go. Craig didn't have much trouble selecting a mug, but I had a time looking over all the beautiful vases. I settled on this one for it's medium size, and I thought the black glaze would set off a bouquet of colorful flowers nicely -- although then I went and put all-white hudrangeas in it!
Posted by Sharon Parker at 11:27 AM