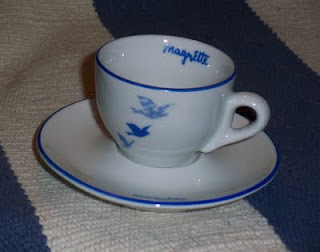 Since I wrote that last post about small but tasty coffees in Belgium, there've been a few little stories inspired by my little coffees (and worth reminding myself before I slide back into old habits -- such as now, sitting at Anodyne with a mug of coffee, which I've just polished off and am about to get a refill!).

I thought that my new preferred drink -- two shots of espresso with a little foamed whole milk in a demitasse (6 oz., actually, which is really just tasse, not so much demi), was the same as a small cappuccino at my local coffee shop, but when I ordered a small cappuccino I got a huge mug, at least 12 or 14 ounces. I thought I had forgotten to say small, but the barrista said, this is a small." After that I would just say, "In the really small cup, I'd like two shots of espresso with a little steamed whole milk, please." Now they're all getting the hang of it and they ask if that's what I want, each one having a different way to summarize it.

One of the baristas, Tony who goes to MCTC (Minneapolis Community and Technical College), commented the first time I requested the drink, "The Italians would be proud." And subsequently, I would come in and he would have the same drink prepared for himself, which he showed me (using the only other small cup -- there are just two, I believe), and tell me that I had gotten him started on drinking it that way, too.

Then, the other Tony (who's in the military but hasn't been deployed anywhere yet, and, frankly, I hope that he remains that way! Maternal me, I suppose.) said, "You could simplify things and just say you want the Stockel special." Which refers to the now-retired mailman, Jeff Stockel, who used to have just such a drink there after he finished his route. Jeff has a teaching degree, and lived in Europe for a time before he came back and found that he couldn't get a teaching job, and so ended up delivering the mail. We have such sophisticated mailmen in my neighborhood -- besides Jeff, there's Vince who's published a book and traveled to Italy with his wife and is now taking Italian classes, and Tim with a master's degree in philosophy (and who also drinks espresso in the small cup).

But I digress; there's more. Another barista, Eva, is of Polish heritage; I often see her mother in the coffee shop when Eva is working, talking to her in Polish. Eva's mother was there one time when I ordered my little beverage, and she said to me, "That's so European." We talked for awhile, and she told me that when she went back to Poland for a visit, she ordered a double cappuccino because she had gotten used to the larger size, and her relatives there said, "That's so American of you."

So, I guess the thread through all of this post is that the joy of going against the norm is that you provoke all sorts of interest. I mean, how often do you order a coffee at your local coffee shop and hear so many little stories and comments in response? And that small is still beautiful, of course.

(The photo is of a demitasse cup I bought at the Magritte Museum in Brussels.)
Posted by Sharon Parker at 10:12 AM 1 comment: