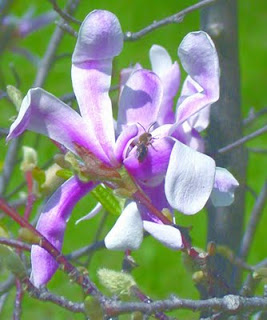 I'm something of a bee geek. I collect interesting facts about bees with the intention that I'll put together a bee zine someday -- a compendium of bee trivia, serialized. If I ever get around to it! In the meantime, perhaps I'll share bits and pieces of my "collection" on this compendium.

So here's something I came across today on Science News: a new study that concludes that African-European hybrid honeybees (aka "killer bees") aren't as smart as European honeybees. The study gauged bee IQ by offering them a whiff of Jasmine scent followed by a little sugar water. When the researchers proffered a second whiff of Jasmine, more of the European bees were quick to stick out their tongues in anticipation of the sweet stuff than did the Afro-Euro bees.

This is apparently a standard measure of bee smarts, and since the killer bees have been taking over territory formerly forgaged by European bees, the researchers expected to find out that they were the smarter ones. Now they're somewhat at a loss for what to make of these unexpected results.

It seems to me that the scientists need to read some of Howard Gardener's writings on multiple intellgiences! Maybe those killer bees are smarter, and they're just not impressed with that whole scent-followed-by-sugar-water trick. They could be smarter in a different way than the scent/sugar test measures.
Posted by Sharon Parker at 12:53 AM