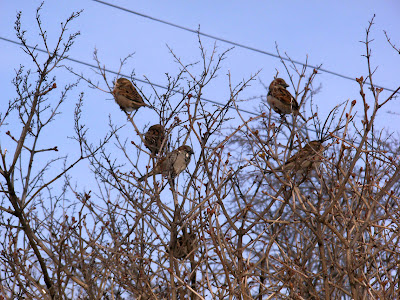 These sparrows, puffed up against the cold, like to gather in my neighbor's lilac bushes by the alley. I'm sure they hang out there all year round -- I often hear their chatter amidst the leaves in summer, but can't see them. Now that the branches are bare, the birds stand out like kinetic ornaments.
Posted by Sharon Parker at 3:44 PM 3 comments: Links to this post 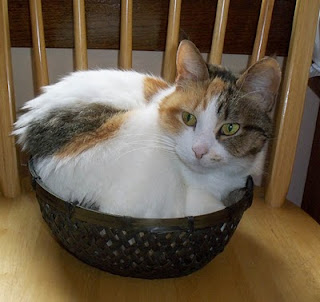 My sister-in-law made her usual cheese ball this Christmas, and packaged it very nicely in a basket with some crackers to go with it, After I put the food away, I set the basket aside to decide what to do with it later. Silly me. Obviously, the basket is a present for my cat Spot. Of course it is; and she did not hesitate to claim it (even though I don't think she really fits, do you?).

It sure would be easy to capture a cat: just put out a cozy basket or box (or paper grocery bag on its side) and wait for one to come along and sit in it. They can't resist!
Posted by Sharon Parker at 1:25 AM 2 comments: Links to this post

The way to travel

I'm at Kopplin's coffee shop in St. Paul, and the owner, Andrew Kopplin, is talking to the people next to me, and my ears prick up when I hear him talking about a recent trip to Europe -- to Norway, as it happens, by way of Iceland. I had to look up and say something, mostly to be transparent about the fact that I was listening (it's a crowded little coffee shop, with tables close together, so it's not like I could have avoided hearing the conversation next to me), and to acknowledge that his tip sounded like a really good idea -- to have a planned layover in Iceland that allows enough time to get out and visit the hot springs. Having endured a flight of 6 or 7 hours to Brussels recently, with our only layover at the Manchester airport (not much to do there besides being shuttled about from one terminal to another), I wanted to make a note of his advice for future reference, because I would like to go again, and I've long been curious about Iceland anyway.

He was saying that the break and the hot springs really helped to not only break up the time you're sitting in an airplane into more manageable segments of a few hours each leg, but also to allow his system to adjust to the time change.

"And they have great coffee," he added -- and he would know, being the owner of pretty much inarguably the best coffee shop in the Twin Cities. But I'll admit I have a certain bias in favor of any European coffee already (no surprise there).

[I borrowed the image of a map of Iceland  from answers.com, but decided not to put a link here because the site has so many ads it's rather a pain to download!]
Posted by Sharon Parker at 12:27 PM No comments: Links to this post