A little bit of spring in my kitchen window

I used to think that Groundhog Day simply meant that there may be only six more weeks of winter, if we're lucky. No St. Patrick's Day blizzard to weigh us down in the middle of March? Sounds good to me!

Imagine my surprise when I learned that the second of February could mark the beginning of spring weather somewhere, provided that skittish fellow didn't see his shadow on that fateful day. Spring in February? What a concept! 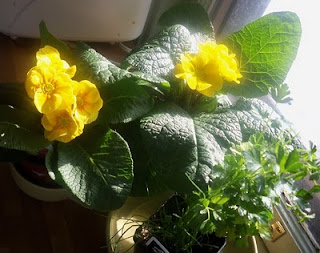 And one of those harbingers of spring, wherever it is that they get that heartwarming season so early, are the wild yellow primulas that brighten wet, shady places along the streambanks in the woodlands. Maybe that's why I get a craving for these cheery flowers about this time every year. My mother's birthday is January 29, so I've taken to buying a yellow primula for her birthday, and then a second one for myself. This year I also picked up a couple of parsley plants and chives, to capture something of the flavor of spring, as well.

I'm also reacting a little to the preponderance of reds and pinks in the color schemes of both Christmas and Valentine's Day -- I want some yellow as an antidote to all that! (I do like pink and red, I just get tired of them!)

So, happy post-Groundhog Day to all, and here's a bit of a harbinger of things to come . . . eventually!
Posted by Sharon Parker at 5:15 PM