On Saturday, Craig and I went to the Art Shanty Projects on Medicine Lake, just 20 minutes northwest of Minneapolis. It's a site-specific art happening that takes place over four weekends in January and February, right out on the ice. Modeled after the ice fishing houses that dot Minnesota lakes in winter, these are artist-made constructions, each having its own specific function. Some, like the Science Shanty, are educational (when we visited, an ecologist was explaining about water quality and what's happening with the water under the ice under all those shanties), and all are interactive in some way. 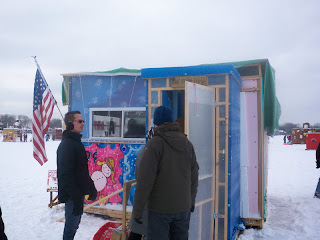 I was excited to encounter the ArtPost Shanty, an actual post office on the ice, with flag, even, to let you know it's a post office. They had run out of the artist-designed postcards that were made just for this year's installation (they had printed 500, they said they would print 1000 next year), but they had supplies for making your own postcards, and since it was a week before Valentine's Day, that occasion was the theme, of course. There were several different hand-carved rubber stamps with heart motifs of one kind or another, and so I just grabbed a red card and stamped away, then addressed it to myself, bought a commemorative stamp to put on it, and left it with them to be mailed. They'll bring it to the Long Lake Post Office, which has a special cancellation just for the Art Shanty Projects. How cool is that? If I had known, I would have brought the addresses of a few of my art buddies and mailed postcards to them too. Next year, I'll be sure to do that. 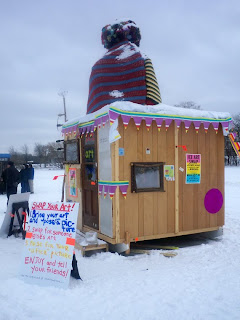 I also visited the Art Swap Shanty, where I brought a handbound blank book I had made a long time ago, and traded it for an offbeat thingy made from a Dixie cup. It had a tiny drawing attached to one side with thumb tacks, and some loopy wire sticking out of the top like an antenna. I can go look on the Art Swap Shanty's blog to see who, if anybody, selected my contribution. They take a picture of you with the thing you brought, holding a sign that says "I brought," and then another picture with the thing you selected and a sign that says "I Got." When I looked at the pictures later, I noticed that were a lot of kids participating, and one kid was clutching something with his "I Brought" sign that could have been my Dixie cup (his mitten hid most of it). It's a pretty fun concept. What I liked about the Dixie cup thing that I got was that it was creatively quirky and not just a drawing. I added it to my car's dashboard gallery of found objects.

Craig wrote about our visit for the spring issue of MOQ, which will come out in March, so I won't go on any more about it. But I will say that I was glad I finally got out to see them, it was really great, and I will definitely do it again next year (with my address book!)
Posted by Sharon Parker at 11:27 PM