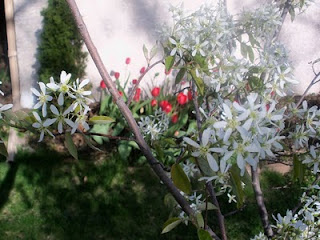 This is our fourth spring in this house, and when we moved in there was no garden. I brought a few shrubs and perennials with me from my old house, and have planted more perennials and a serviceberry in the front yard, and quite a few bulbs, and I feel like we're really starting to reap the benefits. I'm enjoying the starlike blossoms of the serviceberry, but realized after I photographed it that white flowers don't really stand out against a light-colored house, It looks lovelier "in person" than it does in photos, but I took this photo by putting my camera practically in the middle of the tree and placing the red tulips in the background, so it shows you the serviceberry blossoms but not the tree, so much. I'm going to try to find the right angle on the tree so I can get a photo of it's overall form. 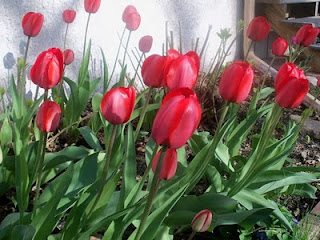 I posted some garden photos earlier on my Flickr page, but I don't know if anybody's looking at them there, so I thought I'd try posting them here instead.

I love the way a perennial garden unfolds in stages, so this is the serviceberry and hybrid tulip phase. Before this was the forsythia and species tulip phase, some of which you'll see on my Flickr page. Next to bloom should be flowering crabapples, except I don't have one of those yet! I know where we can plant one, though, so that will be this spring's planting project.

And the dandelion and violet phase is well underway in the lawn!
Posted by Sharon Parker at 11:36 PM