A cottage garden by any other name

When we were reading the paper last night, hubby mentioned that there's a story on the front page of the Variety section about edible landscaping, "but there's nothing in it you don't already know." So I had to read it to see if he was right. 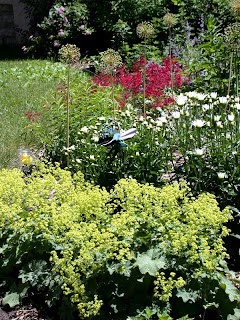 While it proved true that the story offered no great revelations about gardening--the gist of it was that you don't have to establish a separate vegetable garden, you can mix edibles and ornamentals--I kept reading because I wanted to know if it would occur to anyone (the writer or her sources) to credit this idea to the old English peasants and their cottage gardens. And of course it did not; there was no mention of cottage gardens or peasant gardens of any kind. It was as if this woman, Rosalind Creasy, who wrote a book in 1982 called The Complete Book of Edible Landscaping, didn't just coin a new term for the old practice, but actually invented the practice herself. I haven't seen the book, which will be reissued and updated with the title, Edible Landscaping later this year, so I can't say that Creasy doesn't give credit where it's due, because she very well may do so in her introduction or something. I may have to get the earlier edition of the book from the library just to satisfy my curiosity.

But, really, "edible landscaping" is such a prosaic term. I'd much  rather have a cottage garden. Wouldn't you? (My photo isn't really very exemplary, since it doesn't include edibles--I just picked up something I shot last summer rather than use somebody else's photograph. There are lots of wonderful images on the Web, though, such as those offered here.)
Posted by Sharon Parker at 12:16 PM