Wren moves in to the chickadee house 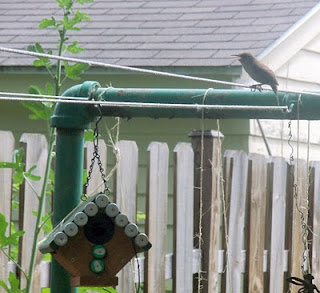 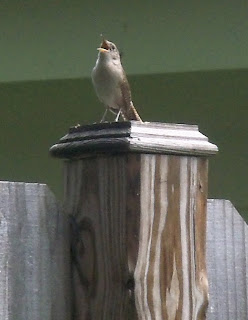 I bought a birdhouse from the Wild Bird store in Highland Park last summer, embellished it a little with bottlecaps, and hung it on the side of the garage, near the raspberries. I kept an eye on it, but it appeared that no birds moved in. I figured the bottlecaps were too shiny or the birdhouse was too new, maybe it just needed to weather a little. Then when Ian, who, with his wife, Julie, owns the house we live in now, needed to take things down off the garage in order to prep it and prime it last fall, I just put the birdhouse  in the garage to try again in the spring.

In the spring, the garage was still ghostly white with primer, and I didn't want to put things back up that would have to be taken down again, so I hung the birdhouse on the clothes pole, close to the garden. Soon a chickadee was checking it out, and not long after, I saw stray bits of grass and weeds sticking out of the sides, just under the roof, where there were little gaps to allow for ventilation. When I was working by the clothes pole, running strings up and over to trellis the snow peas I had planted, the chickadee kept landing on the phone line above and scolding me! Soon, I heard tiny chirping coming from inside the house, and two chickadees were busy coming and going, with frequent visits to our birdfeeder in between.

Since we're moving later this summer, I had been watching for the chickadees to fledge so that I could take down the birdhouse when they were done with it. I figured I would clean it out (the roof is designed so that you can remove half of it fairly easily for that purpose) and store it in the garage so it would be ready to put up again at our next house.

But, although I saw lots of chickadees in the yard, perched on branches of the Norway maple that holds our birdfeeder, and sometimes flapping their wings insistently the way baby birds do, I wasn't sure whether they had truly fledged yet. The English sparrows who had built a nest above the back door under the eaves seemed to still be using their nest, and they had started at about the same time as the chickadees, so I thought maybe the chickadees were still using the birdhouse, even though it was hard to tell. And, of course, I didn't want to disturb them if they were still using it.

When it seemed like the chickadees had really moved out, and I was thinking I should clean the birdhouse soon, I noticed a little bird head sticking out of the hole. It wasn't the familiar black-and-white of the chickadee, though; it was brown. I knew it wasn't the English sparrows (who will invade a birdhouse and kill the occupants, if they find any) because I had bought a house with a metal plate around the hole to prevent the sparrows from widening the hole -- only chickadees and wrens could fit through that hole, and I didn't think wrens were very common in the city.

But then when the little fellow popped out of the house and landed on a nearby twig and began singing his happy bubbly song, I could see (and hear) clearly that it was indeed a wren! And he must have cleaned up after the chickadees, because the grasses are no longer sticking out of the vent slits. I've seen him bringing tiny twigs in his beak, and having to turn his head this way and that to get the little twig through the opening. And then he would land on one of the long dogwood twigs I had stuck in the garden for the snowpeas to climb on, and bubble away cheerily. I figured he was advertising for a wife to share his little house with him, and wished him the best of luck.

I told Julie about the wren moving in to the house after the chickadees moved out, and she took that as a good omen. "If the birdhouse found new renters already, maybe we won't have trouble finding new renters, too," she said.

Then, a couple of days ago, I didn't see or hear the wren anymore. I was a little concerned -- although we don't let our cats roam outdoors, there are cats in the neighborhood who sometimes make an appearance in our yard (mostly to hunt the mice in our compost, it seems). Could a cat have gotten our little wren?

Well, this morning (Sunday), I awoke to the familiar bubbling wren chatter outside my window. And when my husband went out on the patio with his newspaper and tea, he called back to me, "The wren is back! And there are two of them!" And the two of them have been hard at work all day, adding tiny twigs to the nest and musically declaring the backyard their territory. I may have to leave the birdhouse behind when we move, and that would be OK with me.
Posted by Sharon Parker at 5:50 PM 8 comments: