My quest for a shrubbery Since we bought this house this summer, I've been eager to get something planted now to enjoy next spring (not knowing what spring flowers are already here, if any), so I've decided to focus my attention on this corner at the front of the house, which faces west, because, for one thing, it's a rather dull collection of generic hostas with a little astilbe here and there; and because it featured a misguided attempt to deal with a waterfall that cascaded off the roof whenever it rained, pounding a depression into the ground, with the water eventually finding its way into the basement. An odd assortment of rocks, bricks and paving stones marked the spot where the water hit the ground.

Gutters we had installed in early July took care of the waterfall, and this fall I've been working on removing the rocks and pavers and digging up the hostas, which have developed a dense mat of roots over the years. What I thought would be one afternoon's work has occupied me over two weekends so far, with rests in between for my knee to recover after all that jumping on my shovel to cut through those hosta roots.

The long process has afforded me a lot of time to observe the sunlight that reaches this corner and think about what I'd like to plant here. I'm planning to whitewash the gray concrete foundation blocks so there will be no need for the usual foundation plantings to hide them. I decided that I'd like a shrub with an open form that won't grow tall enough to obstruct the windows, and to surround it with some ground covers and spring bulbs. I've got some purple tulips that I mail ordered from Scheepers (and that are sitting in their box in the garage, waiting to be planted). Plants with deep colors, such as a shrub with dark green leaves and dark berries or colorful stems for winter interest, along with the purple tulips, will stand out nicely against the white. Of course I want my shrub to get good fall color, too. 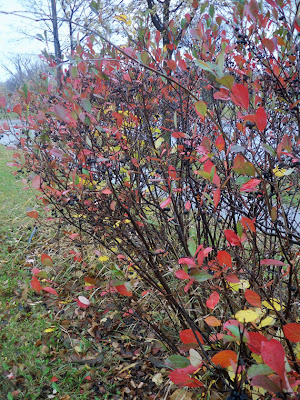 On my walks and bike rides, I've been noticing and admiring a shrub with dark, glossy oval leaves turning a nice, deep red, a graceful vaselike form, and shiny black berries. Thinking it might be just the thing for that corner garden, I did a bit of searching and learned that it's aronia, or chokeberry, and that it requires full sun. My corner garden gets only part sun, so do I have to start over?

I remember noticing on one of many neighborhood garden tours I have gone on over the years, a sun-loving shrub (in this case, Nishiki willow) growing in part shade and appearing to thrive. I asked the gardener about that, and he said that you can grow shrubs that are said to require full sun in part shade if you don't mind them developing a more open form. I tend to prefer the more naturalized look of shrubs that do not take on the dense form of, say, a well-pruned boxwood (although I also like that look sometimes, as an edging), and I was specifically looking for a shrub with an open form for this spot, to stay away from that foundation-planting look. 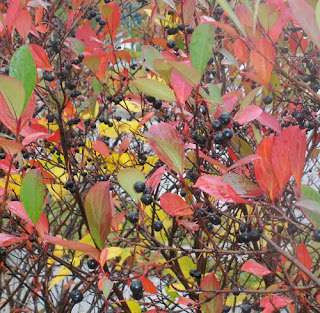 But, form is not the only consideration. Sometimes plants will not be healthy if they do not get the amount of sunlight they want. Is that a concern for aronia? I asked Google, and it led me to an entry at hort.net that answered my question: it will tolerate partial shade, getting leggy (that's the same as open, as far as I'm concerned), but it may be afflicted by mildew in "darker corners."

The usual way of minimizing the risk of mildew is through good cultural practices:  plenty of air circulation. For that, I want nothing obstructing the prevailing winds, which in Minnesota in the summer come from the south/southwest. If I place it towards the center or slightly forward in this garden (on the west side of my house, but to the north of the porch), and plant only low-growing groundcovers surrounding it, it should have no trouble catching those southerly breezes.

The specific cultivar of aronia that I want is called "Autumn Magic," so I called Bachman's and learned that they had six plants in stock, and they were only $20 each, definitely affordable on my budget. Having done my homework, I headed over there today (Tuesday), after an appointment that had me out in the car anyway. Even though it's cold (in the 40s), rainy, and very windy (gusts up to 50 mph!), I was determined to capture my prize. I grabbed the umbrella I keep in the car and headed into the store to find out where they keep the aronia. A helpful indoor employee called an outdoor employee to help me locate the shrub without too much wandering around in this miserable weather, only to be told that they don't have any aronia.

"I called yesterday," I said, confident that they couldn't possibly have sold all six plants when business is so slow due to these uninviting conditions. After sorting it out and confirming that they did, indeed, still have six Autumn Magic aronias, I headed out into the lot to meet the hardy shrub man, holding my umbrella close against the wind so that I could hardly see where I was going. I heard someone call "Ma'am" twice before I located him, looking around my umbrella, which was braced against the nearly horizontal rainfall and completely obstructing my view of whatever was in front of me. After the umbrella inverted itself a couple of times, I gave up and folded it, getting a tad wet in the process but more easily finding my way back to the checkout while holding the shrub in its pot on the cart with one hand, lest the wind toss it to the ground, while pushing the card with the other.

And now it sits in its pot in the garden, where it will remain until the weather settles down and allows me to plant it, along with its companions, those purple tulips.
Posted by Sharon Parker at 5:25 PM 2 comments: