After our rather exciting weather last weekend—the fifth biggest blizzard in Minneapolis, at least since they've been keeping track of such things—I realized that I'd really be kicking myself years from now if I don't do a page or two in my journal about it. 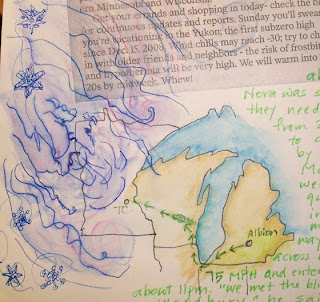 Craig had gone to Albion, Michigan, on Thursday (Dec. 9) to bring Nora back home from college. They weren't able to start driving home until Friday afternoon, because Nora had a paper to write. So I had an image in my mind of the blizzard bearing down from the northwest as Craig and Nora were driving home from the east. They crossed into Minnesota around 11 p.m., just as the blizzard was starting to blow. "We met [the blizzard] in Woodbury," Craig said.

Then, on Saturday, Martin took the car to work at Target in the morning, and ended up working until 3:30 p.m., although he was originally scheduled to work until 1, because so many people couldn't make it in. In the meantime, we were running low on groceries—most notably, cat food—because the day that Craig left for Michigan was payday, and so I hadn't gotten to the co-op to stock up. Craig announced that he would walk to Lunds, a mile away across the river and the Ford bridge, and I said, "I'm comin' with!"

For much of the way at the beginning, the snow was knee-deep, and so it was much more effort than a simple one-mile walk! We had agreed that we would take the bus home, then learned that bus service had been stopped. We found Lunds to be surprisingly busy, and most people there quite cheerful, except a couple of women who had become stranded because there were suddenly no buses (I could think of worse places to be stranded, myself). 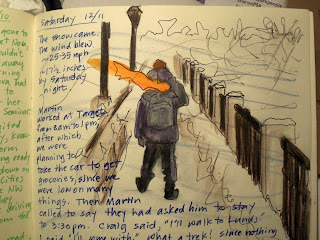 The walk home went a little better than getting to the store, mostly because we discovered that the sidewalk across the bridge had at least been plowed. There is something, too, about knowing you're on the home stretch that makes a challenging trip a little easier. Still, the wind blowing down the river corridor was really something—it even made us stumble sideways a few times. I had taken a few pictures of Craig walking before me on the bridge, but couldn't quite capture those moments when his scarf was blowing straight out like a weathervane, so I used one of those photos and my recollection to make the picture of Craig on the bridge.

We got home about 4 p.m., shoveled out our sidewalks, and enjoyed a lovely steak dinner that night with the whole family at home. There's nothing quite like a good old-fashioned Minnesota blizzard to make a home feel especially cozy!

My photos from the blizzard weekend are on my Flickr page.
Posted by Sharon Parker at 3:04 PM 1 comment: 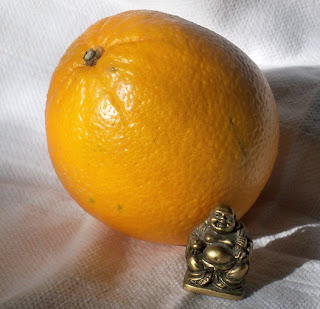 Today, December 8, is Bodhi Day, which commemorates the day that the Buddha, while sitting under the Bodhi tree, attained enlightenment. I once asked a Buddhist friend how to observe the day, and she suggested eating an orange mindfully. Since the orange is obviously not the point, but, rather, mindfulness is, perhaps this is a good day to begin or renew a mindfulness practice, which usually means sitting in meditation.

Meditation, it seems to me, is about setting aside a little time to step outside of our daily activities for the sake of a few moments of mindfulness. I've no doubt that's a good thing. But the appeal of eating an orange (or eating anything) mindfully is that it brings mindfulness to our daily activities. Or at least one of them—and one that most of us are especially inclined to do without awareness, while our monkey minds are racing ahead to the next thing on our to-do list.

But what does it mean to eat something mindfully? A friend once told me that her doctor gave her guidelines for doing just that, advising her to consider the texture of the food, each little nuance of flavor and so forth. I remember listening to her description of those instructions and thinking that it sounded like way too much work. It was more like eating analytically—and I can't help but think how typical it is of Western medicine to complicate something that should be elegantly simple and natural, to the point of making it seem unnatural.

I prefer an eating-for-pleasure approach: slow down, savor, enjoy. It's explained very nicely, without prescriptiveness, in this interview with nutritional psychologist Marc David.