Messing around in books 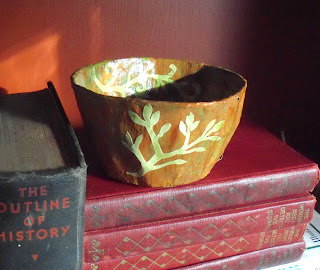 I like books. I like to read them, of course, and I like the look and feel of them, and I like messing with them—writing in them, sometimes drawing in them, and, if the book's not precious and I don't want to read it anymore (or at all, in some cases), I like to carve the pages or otherwise alter the book.

Truthfully, though, I've done very little of that, and tend to get rather intimidated by the sculptured book as art form. Looking at the work of artists such as Jennifer Khoshbin and Brian Dettmer doesn't help, either. No, that's not quite right. These amazing and accomplished book sculptors are certainly intimidating in their skill and artistry, but also inspiring. I don't have to attempt to engage in the same level of intricacy and precision to take inspiration from their wonderful creations.

I'm not as inspired by most of the altered books that come up when I do a Google image search on the topic, though. It begins to look like a fad, and a highly redundant one, to me: too many images of fairies and butterflies and other things with wings (not that I don't love things with wings as much as the next person), and an overall similarity of images and textures and colors. You know, kind of pseudo vintage romantic whatever. And, it seems to me, not really responding to the book as a starting point, but just using any old book as a platform. Pretty soon you'll be able to buy books just for altering at Michael's (an arts/crafts supply store chain in the Twin Cities, and probably elsewhere), if you know what I mean. 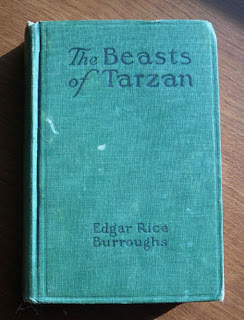 Which brings me to The Beasts of Tarzan, a book I picked up at a used-book store a long time ago and, enjoying the imagery and melodrama of the text and its illustrations, thought I could have a bit of fun with it. It sat for a long time before I did anything at all with it, and then I got the idea to carve out niches and use it like a curio case to display some sort of little beasts, to play off the book's title and theme.

I found some guidelines on creating niches (that link isn't where I got my guidelines, but it pretty much says the same thing), and got as far as making a block of the pages by gluing the edges, and cutting my niches, and then pretty much stopped there, with the book, that is.

I was drawn to the "blocks" of paper that I had lifted from the niches as I was cutting them out, and so I turned my attention to those, making them into miniature artworks, two of which I traded or gave away, and three of which I've listed for sale in my Arty Didact Etsy shop. (Didn't I just sneak in a bit of shameless self-promotion there?) 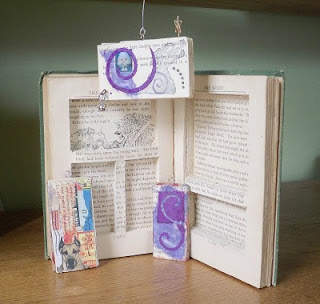 Meanwhile, the book awaits my further ministrations. I'd really like to play a little on the metaphoric idea of beasts, and so, as I usually do, have made it that much more challenging to myself to come up with the kinds of objects and images that will convey the vague notions floating about in my head. Usually, I just need ample time to ponder an idea or theme before I create anything with it; but I keep discovering, in art as well as in writing, that it helps to get those thoughts out of my head and share them with others in order for them to coalesce into something more concrete. Like talking to my husband or a friend about it, or writing about it in this blog. Even just this much, just voicing what's in my head, is enough to get my creative practical gears churning, I find.

So, thanks for listening. And if you care to use the comments feature to say something about your particular beasts, I'd love to read what you have to say.
Posted by Sharon Parker at 4:44 PM