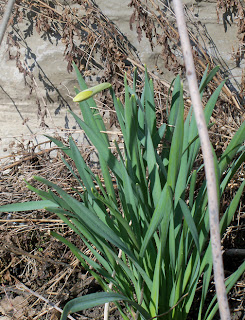 When we made an offer on this house last May, it was after most of the spring bulbs had finished their blooming, and I really don't remember seeing any evidence of bulbs at all. Yet it was clear that the former owner, Julia Johnson, who lived to a ripe old age and died a couple of years before we bought the house, had been a gardener—the peonies and phlox and black-eyed susans and their many floral companions attested to that! (They weren't all blooming in May, but were tall enough to be identified by that time.)

It was a hot spring last year, and that tends to shorten the life of the early frost-hardy blooms—they take the cold with cheerful abandon, but they whither and fade in the heat. Also, the garden had been neglected for a couple of years at least, so there were plenty of weeds to hide the fading foliage of any ephemerals that might be there. Fortunately, bulbs tend to thrive on neglect: The reason for tulips' reputation as not really being all that perennial is because the bulbs rot from too much water and fertilizer during their dormancy in mid to late summer. 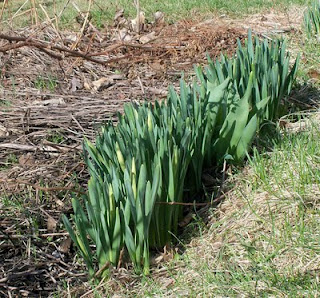 Yet, even though I had plenty of reason to expect to find spring flowers emerging in this bountiful backyard, it's still been a series of serendipities as each day reveals a little more of Julia's legacy. First I spotted tulip tips emerging near the house, followed soon by daffodils—more and more daffodils around the perimeter of the yard, coming up through the thicket of raspberry canes and aggressive perennials—which are already swelling in the bud, very near ready to burst open. 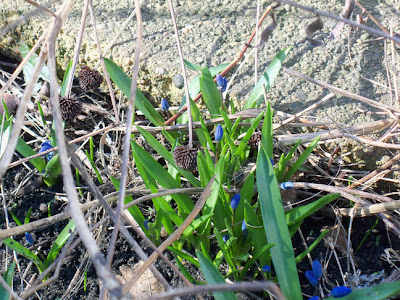 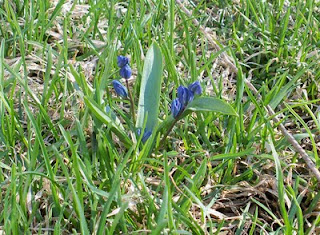 And today I spotted the squill, first in a patch next to Julia's patio, mingling with the seedheads of last summer's black-eyed susans, then a few sweet little blue buds in the lawn by the clothes pole.

But no crocuses, which I find rather curious. I guess I'll have to plant crocuses this fall!
Posted by Sharon Parker at 12:30 PM